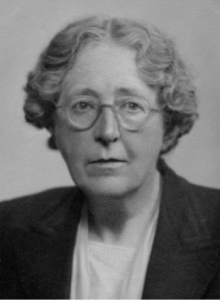 E M Gardner was the driving force behind the inclusion of watermills in the remit of the Windmill Section of the SPAB, which became the Wind and Watermill Section in 1946. She served on the Committee of the Section from 1951 to 1959. Gardner traveled extensively through Britain during her periods of leave and then more widely during her short retirement. She chaired the Watermills Publication Committee for the first six issues of the Watermill Booklets and wrote the fourth of these: The Three Mills, Bromley by Bow. P N Wilson planned to write a booklet with her, but he did not complete this until after her death – Horizontal watermills, published in 1960. Gardner wrote for Country life on Dutch watermills around Eindhoven, and also Milling in the Shetlands, which was a precursor of the booklet on horizontal watermills. As a senior civil servant she was a recipient of the OBE. Gardener died suddenly after a minor operation early in April 1959.