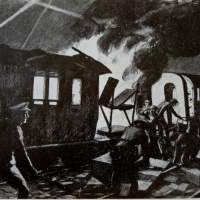 ‘By a piece of singular good fortune, no one was killed.’

This book called A Train Errant shines a light on a little-known aspect of the First World War. The book contains a bound collection of newsletters called The Orderly Review, which were published on board Great War Ambulance Train No.16, which was donated to the war effort by the UK Flour Millers. The Orderly Review was quite a varied publication, describing itself as ‘Illustrative, critical and literary’, with handwritten contributions ranging from essays on Gothic architecture, adverts mocking pastries and reports of the nature that could be seen from the train windows.

The Gem itself is a sketch from one of the newsletters of an incident that occurred on the 21st March 1918, when two bombs landed squarely on the ambulance train whilst it was boarding wounded soldiers at Agnez. The trains were painted with red crosses on the outside to show that they were carrying the injured and should be exempt from shelling, but the enemy were not always merciful, and there were reports of trains having to hide in tunnels to escape the bombs. This train didn’t make it to shelter in time, but the article describes how although the whole side of the coach was wrecked, miraculously nobody was killed and only two people sustained very slight injuries. The incident must have been quite a shock to those on board, but luckily they lived to write about it in the paper! The report states:

‘A couple of terrific explosions, followed by the crash of falling glass announced the arrival of two bombs opposite “H” kitchen. They fell in a shed, which took off some of their force, but the whole side of the coach was wrecked. By a piece of singular good fortune no one was killed. The mess-room was crammed with patients and every part of the train filled up, yet the only casualties were Gibson, who was cut about the head, and Stanley, who was hit in the back by a piece of wreckage.’

Those on the train were not from the British Army, but from the Friends Ambulance Unit (FAU), a Quaker organisation for those who wanted to serve but due to their pacifist beliefs were not able to undertake armed combat. Despite their pacifist nature, the members of the FAU witnessed all the horrors and risks of war and saved many thousands of lives. One such FAU member was an individual called J.W. Major, who is shown in the adjacent picture stnading second on the left in the back row. This gentleman was the father of Ken Major, one of the founding members of the Mills Archive who was also heavily involved in the SPAB. His extensive collection is one of our founding collections and can be viewed on our catalogue here.

Categories: Art and Artists, Disasters, Gems of the Archive, Mills at War