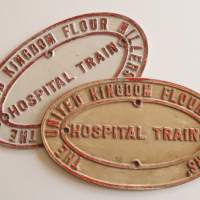 A lifesaving link between milling and The First World War.

These two identical oval plaques once decorated two railway carriages of a First World War Ambulance Train. The two carriages (numbers 16 and 17) from which the plaques come were on one of the earliest ambulance trains, which played a crucial role in the support of troops on the front line. The trains, which transported wounded soldiers from the trenches to nearby hospitals where they could be properly cared for, were equipped with bunks for casualties and treatment rooms where nurses could provide vital immediate care from life-threatening injuries sustained during battle. The lifesaving railway carriages which bore these specific plaques were donated to the war effort by the United Kingdom Flour Millers, whose considerable fundraising effort paid for the carriages to be converted and fitted out.

Carriages 16 and 17 were part of the first British trains to operate on the continent. They were far more suited to their role than the French equivalent (converted rolling stock trains), and their success convinced the British Government to organise the construction of standard ambulance trains, which by the end of the war had transported over two million wounded.

The Mills Archive is very grateful for the kind donation of these plaques by Stephen Cannons, from the collection of his father, John Cannons, a lifelong railway enthusiast. Stephen also provided an account of a relative, Arthur England, who travelled on an ambulance train. Arthur was stationed in what became known as Death Valley, due to the heavy shelling of the area. On the 1st June 1916 he reported:

“I was hit about 11, a nice little machine gun bullet in my left thigh which went straight through – no great damage.”

He would go on to spend a fortnight in a hospital near the front line while his leg healed, and was then sent home by a sympathetic doctor so he could get some leave, having been in Europe for a year. To help his journey, the kind doctor marked him as a stretcher case – but on arrival at the station, the authorities informed the wounded that only walking cases would be allowed on the train. At this point Arthur decided he was no longer a stretcher case, got up and boarded the train back to Britain! His remarkable story, however, does not finish there. Arthur would later return to France where he would be more seriously injured. On returning once again to England, the hospital ship he was on was hit and the wounded were transferred onto fishing boats to make the rest of the crossing.

Ultimately by the end of the war, it is estimated that close to 2.7 million wounded soldiers had travelled on the ambulance trains. They were responsible for saving hundreds of thousands of lives – some of which were saved on the very trains from which these plaques came.

See the Gem ‘A Direct Hit’ to read an account of an incident that happened on one of these ambulance trains.

Categories: Gems of the Archive, Mills at War