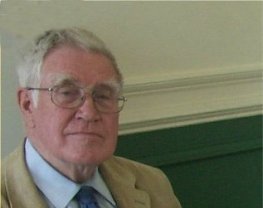 J Kenneth Major was born on 21 October 1928. In November 2002 he wrote the following account of his life:

Owing to a profusion of John Majors I was known as Kenneth from childhood onwards. For most of his career my father was headmaster of Leigh Boys’ Grammar School in Lancashire and it was to that school that I was sent and attended from May 1939 to July 1945. I was at Kendal school from 1945 to 1946.

From an early age I was interested in buildings and can remember cycling at the age of eight to Winwick Church on the outskirts of Warrington, to see the sculptured Winnick Pig, subject of a superstitious legend regarding the removal of the church to a pre-Christian site. This love of buildings led me to cycle long distances in my teenage years to see Cheshire half-timber and Cheshire churches. Leigh, being a very industrial coal and cotton town, had little to attract my enthusiasm. It was natural, therefore, for me to read architecture at University in spite of academic results pointing the way to mathematics at Cambridge.

Because of the numbers of returning ex-servicemen in 1946, I could only get a place at King’s College, Newcastle-on-Tyne, to gain a Durham University degree in architecture. I did not appreciate when I went up that this was one of the four schools of architecture at which the country’s best architects were trained. My training under Professor Edwards and the tutorship of Bruce Allsop was as good as any I could get in England. The training at that time was under the ‘Beaux Arts’ regime, although this would last in England only for a further three years after I qualified.

When I came to take my Part I examination at the end of my third year I suffered real qualms about my place in architecture as a designer. Discussions with the professor resulted in my switching to studying repair, which, at that time, no university was presenting as an option. I visited the Academia in Florence to study the methods there of bomb damage repair and to get a grounding in the Renaissance architecture of Italy. The external examiners referred me back to get a conventional degree as an architect. In my final year I applied for and obtained the 1952 Lethaby Scholarship of the Society for the Protection of Ancient Buildings. I had written a dissertation on “The preservation of ancient buildings” which stood me in good stead for the Lethaby Scholarship.

On completion of the Scholarship I was appointed as architect to the planning staff of Imperial College, University of London. That was in April 1953, and in April 1954 I married Helen Lawrence, whom I had known for four years, the daughter of a Presbyterian minister, Cyril Lawrence.

During this period we visited churches and buildings up and down the country, promoting ourselves to a Lambretta scooter in 1958. We also went to lectures and on the day trips organised by the Wind and Watermill Section of the SPAB, but took no particular interest in mills at that stage. This was all to change as a result of a meeting on the May 1961 mill trip with a professor from Columbia University, New York. His duties in England were to research the construction of a watermill on the Hudson River, known following its restoration, as Sleepy Hollow. The settlers of this area (Tarrytown) had come from East Anglia and so a textbook on East Anglian construction was required. I was commissioned to prepare measured drawings of Woodbridge tide mill as the appropriate source of information. Sleepy Hollow was actually repaired to conform to a Currier and Ives print. I gave a set of the measured drawings to the Wind and Watermill Section of the SPAB and they were enthusiastic about them.

Rex Wailes, the leader of the Wind and Watermill Section although not at that time its chairman, had been appointed the consultant on industrial monuments to the then Ministry of Public Building and Works. Rex Wailes had come to this position from his background in historical engineering, having been apprenticed to Robeys of Lincoln and studying windmills at the behest of a member of the newly-formed Newcomen Society. Rex joined the management team of the family firm of George Wailes and Co. of Euston Road, London, and headed this firm from the time of his father’s death until the premises were compulsorily purchased by the then LCC to create the A40 road.

One of the duties of Rex Wailes when he was with the Ministry of Public Building and Works was to carry out a survey of industrial monuments to see what protection was possible and what was necessary for industrial monuments. The demolition of the Euston Arch and Bunning’s London Coal Exchange had just happened, causing national pressure for industrial monuments to be protected. To undertake this work Rex went around the country recruiting members of local archaeological societies to carry out the necessary surveys. In 1963 he spoke to the Berkshire Archaeological Society and, since he knew me, he asked me to help. To this end I took on board a survey of Berkshire mills and in October 1963 we visited several of the mills in Berkshire to ascertain the value of my understanding of the subject and the scale of protection which would be needed. To that was added a study of the mills of the Isle of Wight, Wiltshire and Northumberland. I also organised a survey of the Kennet and Avon Canal in order to identify all the artefacts belonging to the canal: locks, engines, cottages, cranes, etc. This was presented on a map l8ft long at a scale of 2 inches to the mile.

The 1965 Planning Acts adopted the needs of the industrial monument for the first time on a realistic scale. After this, Rex invited me to join the committee of the Wind and Watermill Section. Professionally, I had moved from Imperial College to become a Group Leader in the Architects Department of London Transport, where I was in charge of the team building bus garages in the New Towns and converting garages to diesel operation.

I joined the architect, Louis Osman, as his only assistant in May 1961 and worked with him until July 1963. This was a good experience as his practice included jewellery and goldsmiths’ work. My principal job was the re-creation of Ranston House in Dorset to its original 1726 form when it had been designed by the Bastard Brothers of Blandford for the Baker family of London. As the business drew in I was forced to leave and joined the architects Morgan and Branch. Here I was the chief assistant in charge of the development of central Doncaster for a client named Lewis Shane. This was a substantial scheme of shops over four acres of underground car parking, also the Borough Library and a 1200 seat cinema for ABC. I then joined Hammersmith Borough Council as the architect in charge of the White City scheme, also of building an old person’s home and other council service buildings. When the White City scheme was cancelled, I joined Westminster City Council. My appointment was to build the Lisson Green development, undertaken in the limbo following the Ronan Point disaster. When the Lisson Green scheme was nearing completion I was given charge, firstly, of the redevelopment of the Westbourne Gardens Estate which Westminster had purchased compulsorily from Rachman after he was exposed. Here, 101 Victorian houses had to be repaired and converted to council dwellings for higher status tenants. I was later in charge of the maintenance team responsible for the council’s own buildings. In 1975 I was appointed as architect to the Planning Department for the purpose of public inquiries in the Mayfair area. As Assistant City Architect I had other administrative duties as well as council committee attendances. The Department closed for reasons of political dogma in 1984 and I then commenced to practice on my own.

During my employment I was under contract not to practice ‘on the side’. This enabled me to give my services to the Wind and Watermill Section and to the main committee of the SPAB. This took the form of advice to owners, trustee bodies and the like. My committee attendance at the Wind and Watermill Section was full of interest and, sometimes, hard work. In 1964 I met Santos dos Simoes of Portugal who was travelling around Europe to meet mill societies and mill enthusiasts to bring them together. He called a first meeting of ‘molinologists’ (his word) at Cascais, in Portugal, in 1965. I could not attend that meeting, nor the second, in Denmark hosted by Anders Jespersen in 1969. As a result of that meeting in Denmark I was asked to represent the UK in bringing a constitution forward to the third meeting of the international society in The Netherlands in 1973. This constitution was to lead TIMS (The International Molinological Society) into the future. The constitution was adopted in 1973 and we moved, under the chairmanship of Mario van Hoogstraten, to the 1977 symposium in England.

I began to write, and in 1970 my first hard-backed book “Mills of the Isle of Wight” appeared. This was followed by “Fieldwork in industrial archaeology”, which has been very well received. In 1978 Batsfords produced my “Animal-powered engines”, the first comprehensive study of the subject. I edited the first simple TIMS newsletters and acted as publisher for the first eight or nine TIMS publications. I edited “The Windmills of John Wallis Titt” and, with Andre Gaucheron, wrote “The Eolienne Bollee”. In 1967 I started to lecture on industrial archaeology and, later, vernacular architecture, to the extra mural departments of the Universities of Reading and Oxford.

My private practice began with the completion of buildings left unfinished when the Westminster City Council Architects’ Department closed. I quickly picked up a lot of planning and report work. I had visited Painshill Park, near Cobham, in 1981 and 1982 before it became a trust, and reported on the waterwheel (36ft in diameter and 2ft 9in wide) as well as the use of the gothic tower by someone like the Landmark Trust. When I was in practice I was used by Painshill in an advisory capacity until monies were provided for the repair of the waterwheel. This was completed in 1988 and inaugurated by the Duchess of York. I went on to repair Stainsby Watermill on the Hardwick Estate for the National Trust, and Sacrewell Mill for the William Scott Abbott Trust. Lots of church projects were undertaken and the most exciting repair, under SPAB philosophy, of Churchgate House in Cookham. Another exciting job was the repair of a single-cell cottage at Mowsley in Leicestershire. This cottage dates from about 1300 but retains its original form with a plan determined by the rod (l6ft 6in). I have been longer in my own practice than in any other job.

Mills still dominate much of my life!