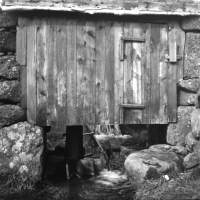 This photo is an important reminder that without a range of extraordinary enthusiasts these collections would not exist.

This Gem is a black and white glass plate negative, from a series taken by David H Jones, a specialist in watermills.

During his research, David came across an account written by a soldier stationed on the Faroe Islands during the Second World War, who wrote about Norse mills on the island which were still in working order. Norse mills are a very basic form of mill, which use a small horizontal waterwheel and rely on controlling the flow of the water stream for precise grinding rather than using gears. They are the earliest surviving type of watermill in Britain, found only on the Northern Scottish Isles and in the Western Highlands. The chance of seeing this watermill for himself sparked David’s enthusiasm, and he decided to set off his own on a trip to the Faroe Islands.

This inspired David to set off on his own trip to the Faroe Islands to discover these mills for himself. However, this turned out not to be an easy task! He writes in his book: “I began planning the journey to visit them, but found it was not easy. The local travel agent had never even heard of the Faeroe Islands”. It transpired that there was no direct service taking visitors across the Norwegian Sea; the only port where he could find a ship was Copenhagen, and the only transport he could find were trawler vessels, the captains of which could occasionally be persuaded to take a passenger along, if they had the room. This was looking like it would be David’s best bet – until thankfully, his travel agent found a Faroese service that had added a few stops at the Shetland Islands. This meant that all he needed to do was get to Lerwick, the main port of the Shetlands. Sounds easy enough? Not so much in the 1950s…

“That was before the days of mass air travel and the BEA aircraft used in northern Scotland had two radial piston engines and seated 36. It was not pressurised, so as it took off the steward came round with a tray of barley sugar.”

And thus the expedition began! David describes leaving work in west London on the Friday evening, taking a steam train to Paddington, the underground to King cross and then finally catching an overnight train to Edinburgh. Here he caught a train to Glasgow, then a bus, a tram and finally walked to Renfrew airport. He hadn’t even left the British mainland and already he faced a trek worthy on an intrepid explorer! This much effort to travel is in stark contrast to today, where you can catch a flight from London straight to the Shetlands or even the Faroe Islands themselves. David described Inverness airport, today a modern, sprawling airport, as a “pair of Nissen huts”, Kirkwall airport as a “collection of improvised wooden huts” and Sumburgh as “a tiny kiosk with a signpost beside a bus shelter”. It is hard to envisage this, being used to the highly secure and modern airports of today!

Upon arrival at the Faroes, visitors were immediately faced with a major culture shock. David recalls that he was the only English traveller who knew what language was spoken there! Faroese is a North Germanic language descended from the language of the Middle Ages, Old West Norse. Danish is spoken as a second language and fortunately, David could speak a little Danish and was not completely stuck. However, due to issues in differing accents, David would have to communicate with the Grandfather of the family he was lodging with entirely through written Danish.

This barrier overcome, the journey was still not over quite yet: David still faced the task of actually getting to the mill.

“The nearest workable watermill was in the village of Kvìvìk, on the same island we were on. There was no road to that part, so I would have to take a boat. Next morning I went down to the quay and found a fishing boat. There was no special provision for passengers, not even seats; we just stood on the deck”

As the boat began pitching and rolling with the waves, Jones and his fellow local passenger found it harder and harder to remain on their feet – crashing into a metal frame that was the beginnings of a roof to shelter the passengers. David writes that the captain began to put the frame back into position, comparing it to “resetting a mousetrap ready for the next victim”. The boat arrived in Vestmanhavn, where he was to be picked up and driven by car on to Kvívík.

Upon arrival, he met the Bærentsen family, who he would be lodging with. Throughout the house David was staying there was evidence of Faroese traditions and a simple lifestyle; for example they had a bowl of family photos in the kitchen, which David explained was a Faroe custom available for any visitors to look through. The grandfather of the family even wore Faroese national dress!

The next day, after all this adventure and hard work, David finally set out to reach his final goal, and was rewarded by the discovery of a fully functioning Norse Mill.

He describes it as only being “slightly bigger than a large dog kennel”, anyone working it would have to “hunker down in front of the hurst”, while the millstones he claimed were about the size of a hand quern. Upon closer inspection he discovered that its tentering system was rare or unique, where a pair of wedges adjusted the bedstone by lifting front edge of the hurst.  He questioned why it had not been used elsewhere being so “simple and obvious”, perhaps this is due to the isolation of the islands, so ideas did not travel outside to the wider world? The mill was not used by the family but it was still functional, so David brought some barley to grind at the local shop. After a bit of trial and error, David managed to grind meal of the coarsest and finest variety, with the fine meal taking seven times longer. After presenting his work to the grandfather, he was told the coarsest could be good food for the chickens while the finest was of high enough quality to be used for cooking. Not bad for a tiny watermill!

After his successful visit to the mill, David took the opportunity to learn about the culture of the Faroe Islands and swap stories of everyday life with his host family before beginning the long journey back home – but not before dropping by Copenhagen to visit some Danish mills on the way!

It’s truly remarkable to read about the lengths that the intrepid David Jones went to to find these elusive Norse Mills, and it’s fascinating to read about what the Faroe Islands was like in the 1950s – a land lost in time.

Categories: Early Photography, Explorers and Adventurers, Gems of the Archive