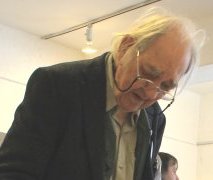 David H. Jones was born in South Kensington, within walking distance of the Science Museum.  Claiming to have always been interested in machines of every kind, later in life David read all that he could to find out how things worked.  Although intrigued by watermills and windmills, mills were for some time just one of many types of machines David was interested in.

Yet David’s curiosity in mills persisted, with a series of anonymous magazine articles on watermills, windmills and tide mills catching his interest.  Alas all the examples mentioned were out of his reach.  This was until, as luck would have it, a family holiday included a day at Emsworth, West Sussex.  After taking off on his own in search of tide mills, David recalls that Slipper Mill was the first mill he ever saw.

Given these early interests, a career in engineering seemed inevitable for David.  He went into electronics, eventually becoming a design engineer.

After the war David became interested in cinema and decided that Slipper Mill would make a good subject for a film.  On visiting, he was made welcome and started work.  Yet no sooner than the very early stages of the project, the mill stopped working.  Unperturbed and determined to produce the film, even if it meant visiting a mill at another location for the interior shots, David enquired at Emsworth about nearby working watermills.  Pointed in the direction of Terwick Mill, plans changed, as David decided this mill was in its own right an excellent subject for a film.

In 1953 David contacted the SPAB (Society for the Protection of Ancient Buildings) to offer his services to the cause.  Very soon after, he began a survey of the watermills of Hertfordshire, although he never finished recording the mills of the northern part of the county.  It was after discovering Anders Jespersen’s booklet Gearing in Watermills that David came to appreciate how much understanding could be gained about mills and milling from gathering sufficient information about particular mills and plotting them on a map.  He was also astonished by some of the watermills shown in the booklet which were unlike any he had ever seen.  They were overdriven, which David could understood made sense in a windmill, but could see no reason for in a watermill.

David’s interest was well and truly sparked, he felt he had to see these strange mills for himself.  He began learning Danish and the following summer took a train to Odense to begin his journey of discovery.  Here he saw a number of mills, ending the trip with a visit to Jespersen, which marked the start of an enduring friendship.

On returning home David began searching for the extension of his distribution pattern but met with little success.  Realising that local studies of mills could not answer the bigger questions he had in mind, David saw the need for a national survey of mills and decided to produce one!  He recognised that it was impossible for one person working in his spare time to see more than a small fraction of the surviving mills, but felt that a sampling survey would be sufficiently extensive to answer some general questions and was within his capacity.

Soon he discovered that seeing about ten mills in a small area was enough to isolate the special cases and reveal local patterns.  Areas were chosen at random as opportunities arose.  For several years David continued to search for gearing patterns.  Instead of patterns David discovered great variety, including other features of mills which called for explanation such as the number of floors, their uses and why floors in some mills had split levels.

In 1958 David made his first visit to Wales and discovered the features of Welsh mills yet again radically differed.  Yet from these differences and with his growing experience, David saw a basic national pattern forming.  But he still had to prove it!  Over the next ten years David gathered much more material.  Although still lacking data from some areas, David felt the evidence he had gathered was sufficient to support the pattern he had found and to risk publication.

Thirty years later, after much further recording by himself and others, the regional pattern David proposed still stands up to scrutiny.  To his great relief Devon and Cornwall are the only regions for which the pattern requires any revision.

David’s passion for mills later led him to follow another line in France, discovering French mills with lifting waterwheels that could be adapted to extreme changes in water levels. This line of enquiry led him to other designs in Germany.

An episode from his interest in moulins pendants, entertainingly recounted by David, illustrates the hazards of exploring mills by boat.