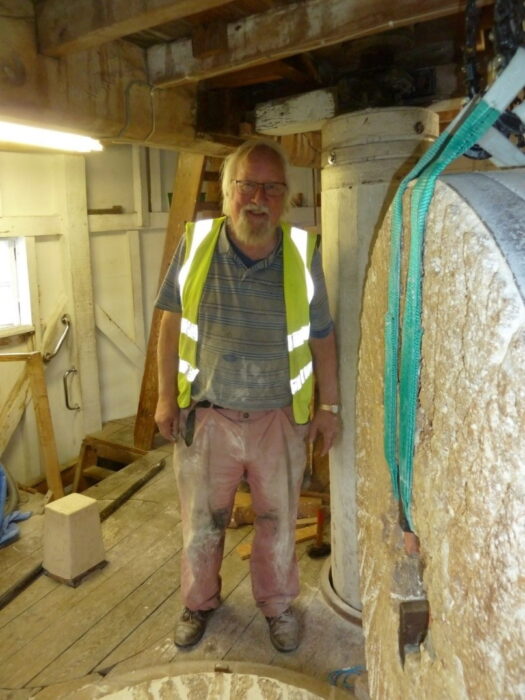 Two hoists are hung just above bin floor level to gain height when lifting the runner.  Our bespoke 2 tonne slings are doubled up for safety.

Policy demands 4 millwrights during a lift:  2 on the hoists, and 2 manoeuvring the stones:  one should be in charge and watching over safety.  Sometimes we have a 5th millwright, tasked with keeping watch on proceedings.

Rob Bramley is working the foundry, the charge of alloy approaching melt. The moulding boxes in the foreground are for sail shutter fittings

The ‘original’ brake lever has been reinstated.  It is shown with the preserved brake hook and brake pulley, and a temporary brake rope

Pressure in the aquifer raised water within reach of suction pumps. Two deep wells with hand pumps were sunk. The 6-sailed windmill was built to pump water from a third well to tanks in the roof of the Canon’s house.

The sails are interesting. Six have been rebuilt, several being almost entirely new. Four remain to be fitted. The general appearance is of a fantail, 16ft diameter. Uniquely now, each blade has radial shutters, spring controlled. The millwright could be Rawlings.

Graham Hackney got permission from owner Mr Welch for Wicken Millwrights to make repairs.  These have proved extensive

Tarring, Wicken, August 2021
These days we hire a hydraulic lifting platform annually, for safety inspections and checking the tightness of sail fixings.  We inspect the paintwork on sails and cap:  the sails take a ‘rare pasting’ from the fen blows and on average need repainting every four years.  The cap roof over the storm hatch also needs frequent attention.

The cost of paint and equipment hire are two of Wicken Mill’s major expenditures, eased by our millwrights and millers working so effectively.  We have sustained the mill in full going order for 20 years, but must look to even harder effort to build up funds for the future.

Dan Carrick (& David Wall out of sight) tarring the smock