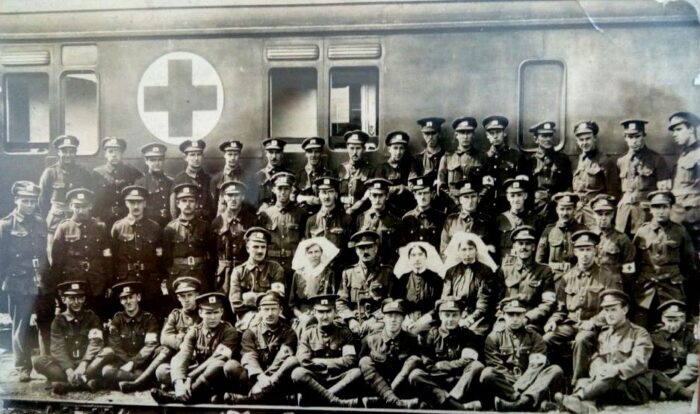 By Ron and Mildred Cookson

With Remembrance Sunday next weekend, this week’s newsletter is devoted to the varied roles played by mills during the two World Wars. As field hospitals for wounded soldiers, as look-out posts, as places to relax away from the battlefield and as a means of feeding a nation under siege, we remember their important contribution to the war effort. Many mills were damaged or destroyed during the conflicts; some were even used as target practice. Millers also played an important role; the UK Flour Millers sponsored an ambulance train during the First World War and the Searle Grain Company presented a Spitfire fighter plane to the RAF during the Second. Supplements were added to “National Flour” in 1942 to keep the UK’s population healthy. This article is taken from Mills at War by Ron and Mildred Cookson.

By the end of the war, more than two million soldiers had been repatriated on specially built ambulance trains, a British invention permitting surgery on the move. The UK Flour Millers proudly supported this initiative by sponsoring carriages on these trains, often staffed by Quakers. The latter, although conscientious objectors, still risked their lives under enemy bombardment. You can read more about the ambulance trains here:

From flour to France and back again – The Mills Archive

and here:
A direct hit – The Mills Archive.

In 1939 the British Government worked with the Windmill Section of the Society for the Protection of Ancient Buildings to determine which windmills were still capable of producing flour. Many had been neglected or abandoned as uneconomic when cheap fuel could power larger mills, but now the situation was reversed with fuel supplies under severe threat.

The introduction in 1942 of “National Flour”, which was coarser (85% extraction) than the pre-war average (72%) and contained nutritional supplements, ensured the population’s health was maintained, possibly improved, even during severe shortages. This was so successful that when the scheme was withdrawn in 1956, it was against the advice of medical experts.

Sadly even British windmills suffered at the hands of the Royal Artillery during the Second World War.

The 18th century pumping windmill at Walberswick in Suffolk was used by troops for target practice. Having “given point and character to that stretch of the marshes between Walberswick and Dunwich”, the mill worked until the start of the War, regulating the flow of water in the marsh dykes. In 1951 an appeal was launched for £800 to repair the mill, supported by Benjamin Britten, the SPAB Windmill Section and others.

Other mills suffered severe bomb damage during the Second World War, such as Cranfield’s Mill, near Ipswich in Suffolk.

Many hundreds of mills were damaged or destroyed on the French battlefields during the First World War, such as the Moulin Accart, in ruins by 1916.