This is the first attempt to bring together the many issues that connect mills and warfare. Attention has been mainly focused on Western Europe and North America, reflecting relevant material in the collections of the authors.

Mills both prospered and suffered during wartime. Not only vital to the supply of food, they were central to the supply of gunpowder for more than 200 years. Their locations were often of strategic importance; some were fortified, others destroyed as inconvenient. Many windmills in Northern France were severely damaged by enemy action in the First World War; elsewhere they provided a focus for relaxation, training and manoeuvres.

The mill was not just a military asset, artists and propagandists valued them as icons of our culture and civilisation. They served to stimulate patriotism and pride, echoing memories of home and romance. The sense of irreparable loss of traditional mills is reinforced by the essentially peaceful role of rural mills in helping to feed the local populace. The damage to our built heritage is unquestionable, but the real danger to our milling heritage is neglect, not acts of war. 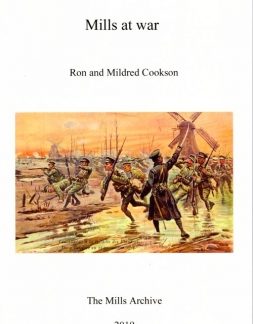