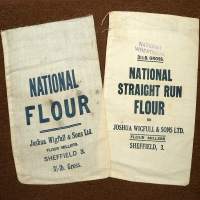 This flour was Hitler’s secret weapon.

This Gem is a photograph of two flour bags, which were produced under Government regulations during the Second World War.

At the start of the war Britain was importing around 70% of its grain, but with the demands of war and the risk posed by U-Boats to imported supplies, the government sought ways to make limited grain supplies go further.

Bread was never rationed during the war, but it would come under rationing from 1946 till 1948. Commercial white bread, however, was banned altogether on the 6th April 1942, and sliced white bread wouldn’t be reintroduced until 1950, with the National Loaf abolished six years later. The National Loaf was unpopular and was dubbed ‘Hitler’s Secret Weapon’. It apparently had an unappealing colour and texture, but was much less wasteful than the more popular white bread and saved on limited supplies, as well as being healthier. Furthermore – at least according to the Minister of Food at the time – it acted as an aphrodisiac!

In today’s health-conscious world, with a backlash against white bread, it is interesting to see the unpopularity of the introduction of what effectively was brown bread. Indeed, the National Loaf didn’t appear to have any lasting effect, and as soon as it was reintroduced people started buying white bread again.

Gem from the Martin Watts Collection

Categories: Gems of the Archive, Healthy Heart, Mills at War