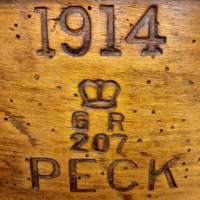 Millers have historically had a terrible reputation. Old sayings such as ‘honest millers have hairy palms’ and ‘safe as a thief in a mill’, show how unpopular they were in their local communities. They were accused of stealing more than was due to them, as well as having ideas above their station. In general, they were seen as untrustworthy and selfish, enriching themselves at the expense of others. A fine example of this can be seen in Chaucer’s The Reeve’s Tale. This is a modern translation of an excerpt describing a miller:

‘He was a quarrelsome swaggerer to the full.
No man dared a hand on him to lay,
Because he swore he’d make the beggar pay.
A thief he was, it’s true, of corn and meal,
And sly at that, accustomed to steal.
His name was known as arrogant Simpkin.’

This Gem is a wooden grain measure. Ones like this were used in the 19th and 20th centuries to standardise grain measurements, combatting any chance of unscrupulous dealings. They were handmade out of wood and had to be officially verified as matching the official measurements; once verified, marks would be burnt into the wood to clearly show the measurements. This included a mark at the outside top of the measure so that the rim couldn’t be shaved off to make it smaller, and a mark on the inside bottom so a false bottom couldn’t be inserted. As well as this they were marked with their capacity, the initials of the reigning monarch and the Royal Cypher. The lengths gone to to ensure that a measurement of grain couldn’t be falsified show how regular an occurrence it must have been before such measures were made!