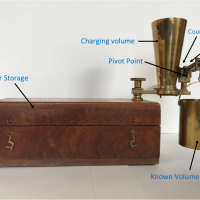 This curious contraption is a chondrometer and is used for measuring the quality of grain.

This unusual Gem is a chondrometer: a measuring instrument designed to determine the bulk density of grain. It is essentially a specialised set of scales, with a small pot for the grain on one side, and a counterweight that slides along a scale on the other side. It was used by millers and grain merchants to tell the quality of the grain: they would take a small sample of grain and from it measure out a bushel, using the chondrometer to determine the density, which is what denotes the quality of the grain as if some of the grains were withered, the density would produce a lower weight. They were made to be small and portable so the miller or merchant could take it with them wherever their business was; as such they usually came in a built-in box like this one.

The way a chondrometer works is that that the grain would be put in the small tub called called the ‘known volume’. Excess grain would be scraped off the top using a ‘strickle’, and the known volume then placed on the scale. The counterweight on the other side would be slid along the scale until it balanced against the known volume, at which point you would read the test weight from the scale, based on where the counterweight is. The miller would then be able to tell the quality of the grain.

Later versions of chondrometers such as this one would have a conical funnel or charging volume, allowing you to fill the known volume in a more controlled manner.

This specific chondrometer belonged to the miller at Crayford Mills in Kent, and was used all the way up to the 1980s. It was made by the firm Corcoran and Son, established by Bryan Corcoran in 1805. The firm gave evidence for a petition relating to the Weights and Measurements Act and following its imposition, they were one of several companies to develop chondrometers.

Gem from the Small Donations Collection