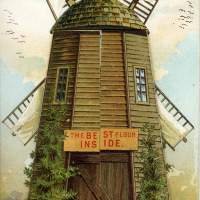 You never know what may lie inside an advertisement.

This Gem is a trade card for Washburn Crosby Company Flour Mills, produced in around 1890 to advertise their Gold Standard Flour. What makes this trade card a Gem is the fascinating folding design: the picture of a traditional windmill on the front of the card folds out like a folding children’s book to show a modern roller milling complex inside. This shows the progression from traditional flour milling to modern, industrialised flour milling. However, conversely to the wistful, sentimental portrayal of traditional windmills and their contrast to a more negative view of the industrialisation of milling that we often see, this trade card views modern milling in a very positive light, stating that

“There’s as much difference in the Flour of some mills, as there is between an old wind-mill and the most modern milling plant in the world.”

Washburn Crosby Company Flour Mills was an American company based in Minneapolis, set up by Cadwaller C. Washburn in 1856. The original mill was called Washburn’s Folly as it was criticised for being far too large for the demand of flour. Nonetheless the company was successful, leading to the building of a larger mill called ‘A’ Mill in 1874. In 1874, soon after the expansion, an explosion destroyed ‘A’ Mill, killing eighteen people. In response, the company invested in more modern and safe technology, making it the first mill to use automated roller technology, increasing their capacity to 5,500 barrels a day.

In 1928 the company merged with twenty-six others to create General Mills, a global food company which continues to operate today and produces well-known products including Cheerio’s and Nature Valley. They have expanded from just milling and food production, and were responsible for the invention of Black Boxes for planes and the submarine that explored the wreck of the Titanic when it was first found.

Interestingly, the reverse of the card describes the flour in a way that may not be quite so popular today:

‘This flour contains a large percentage of the gluten of wheat, and a very small proportion of starch, and for this reason bread made from it, does not become dry and tasteless, but retains the sweet flavour of the flour, and will keep moist for several days.’

Practical as this sounds, modern tastes have changed. In 2015, over 850 products sold by General Mills were gluten-free, whilst in 2005 it was the first major food company to make all of its cereals with whole grain. Indeed, modern advertisements make much of this for the health-conscious consumer – bringing it all back to the beginning, but with a contemporary twist.

Companies have constantly sought new and novel ways to appeal to consumers through advertising. This trade card does just that, whilst also demonstrating the development of milling technology.

Categories: Advertising and Symbolism, Disasters, Gems of the Archive, Healthy Heart, The Industrialisation of Milling