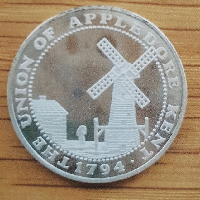 A token used when the country was short of money.

In the 18th century, a shortage of coins consistently caused widespread problems: workers could not be sufficiently paid and simple transactions could not be carried out. It wasn’t that everyone was poor – there just weren’t enough coins to go around. To compensate for the shortage, unofficial stamped tokens were created to be used in place of money.

Such tokens were called Provincial Tokens, or Conder Tokens (named after James Conder, an early collector who catalogued the coins). The Mills Archive has in its collection its very own token: this silver reproduction was struck by the Mills Section of the SPAB in 1994 on their 65th anniversary, but the original on which this was based dates to 1794 and was engraved by William Wyon, who would later become the chief engraver for the Royal Mint. The token shows a large smock mill, with a man carrying a sack standing next to it. On the reverse of the token, there is a lion and a lamb with the motto ‘Peace, Innocence and Plenty’ – drawing on biblical imagery. It is printed around the edge with the text ‘Payable at W. Peckham’s Appledore’.

Because the tokens were minted independently of the government, their creators had the freedom to make political statements, social commentary, honour great men, ideals, great events, or just advertise their businesses. Many tokens have survived today, partly because the hobby of collecting them was popular even when they were in production, resulting in numerous well preserved examples. The tokens were issued with four different edges: Peckham’s (like this one); plain; W. Friggles Goudhurst; and Lancaster, London or Bristol. The plain-edged token and the Lancaster, London and Bristol token are scarce these days.

The mill on the token is the Union Mill in Appledore, Kent, a smock mill built in 1791. The Appledore Union to which it refers was a group of farmers who joined together to build a mill, which they each used, as did others for a fee. This mill was often broken into, so they devised an ingenious plan to catch the thieves called the ‘Sack Trap’. A watch was set with each member armed with empty grain sacks. They would lie in wait for intruders, and if any came they would throw their sack over the unsuspecting thief, entangling them so they were easier to catch. This unlikely-sounding system did in fact work at least once, allowing them to catch a member of a local smuggling gang. The mill no longer stands, but its base has been converted into a house.

Not much is known about W. Peckham, apart from that he was a shop owner in Appledore and is described as a Freeholder in the Kentish Poll for Knights of the Shire to represent the County of Kent 1802. His inclusion in this list suggests he was relatively wealthy and of some social standing within the community. Interestingly, whilst these tokens were usually only payable to one shop or locality, copies of this coin exist which state that they are payable to W. Friggles of Goudhurst.

The use of a mill on this token demonstrates, once again, how influential milling has been as part of our wider heritage and culture.

Thank you to Bob Bonnett for providing us with information for this article.

More information about the tokens can be found here.

Categories: Advertising and Symbolism, Art and Artists, Gems of the Archive