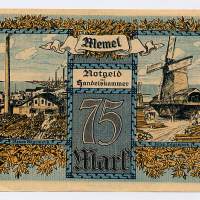 A pre-war note which became worthless is now an expensive collector’s item.

This paper note is an old form of German currency called ‘Notgeld’, which was printed in 1922 and was worth 75 German marks. The image printed on the note depicts the development in timber milling from the old wind-driven mill on the right, to the new modern timber mill on the left.

The term Notgeld means emergency money, which is exactly what this currency was designed as. After the end of the First World War, Germany suffered from a lack of money; to combat this, the Reichsbank gave localities the authority to print their own paper currency as well as some small change. The resulting notes were intricately and attractively designed, depicting local landscapes, people of significance and industries such as this note depicting a timber mill.

This specific note came from Memel, a region on the Baltic coast that was once part of Prussian Germany, but is now officially in Lithuania. At the end of the Great War, the newly created Lithuania had designs on Memel as it was a major port in the area. However, Memel was placed under the administration of France under a mandate from the League of Nations, until an uprising when the region was finally made a part of Lithuania. This currency was circulated by the French Administration in the early 1920s, when the region was still officially French.

The freedom with which these notes were printed meant a wide range of attractive designs were created, and were soon the object of attention for collectors. Whilst at the time they were printed they were worth little due to the post-war inflation from which the region suffered, they are now worth a lot of money.

Categories: Advertising and Symbolism, Art and Artists, Gems of the Archive, Mills at War