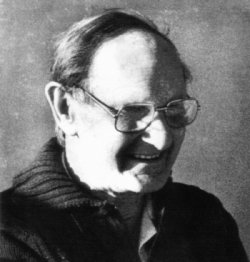 The following account of Michael Dunn’s life was written by his wife Mrs J Dunn in 2002:

Dr Michael John Dunn was born in Lewisham on 18th June 1916. His father, the Rev. Robert Louis Acland Dunn, was tragically killed in a motorcycle accident on 26th February 1917 when Michael was only eight months old. Michael’s mother, Violet (nee Cox, of Beaminster, Dorset), distressed and too poorly because of asthma to manage alone, was helped by her great friend, Nora Pendrell-Smith, to care for Michael. Violet died when Michael was just eight years old. “Aunt” Nora selflessly continued to bring up the lad, moving with him to a house called Herringfield, in Iden, Sussex.

Educated in small schools – one was at West Wellow near Romsey – Michael entered Pembroke College, Oxford, to read English, but left after a year: “I came down before I was sent down for not working hard enough!” He then spent several months in Provence, doing typing for an author. Some lovely photographs (taken on a box Brownie) date from this time.

While visiting Cornwall (more delightful photographs, some of watermills) Michael started to take a great interest in medicine. Returning to his aunt’s home he went to a “crammer” in Hastings to prepare for the Science tests required for entry to Bristol University in 1939. His aunt sadly died before seeing him settle down to this beginning of his serious life’s work.

Mike’s great ability at photography occasionally proved useful in his medical work, when he was required to photograph interesting and exceptional cases for records on behalf of fellow doctors. While a medical student in Bristol during 1940 he was able to take, surreptitiously, historic photographs after air raids. These pictures have been lent to Bristol Museum.

Graduating in 1948, Mike did his two required “house jobs” at Southmead Hospital and at the Bristol Royal Infirmary, before studying radiology in Bristol. This led to short locum consultancies, then one of several months at hospitals in Cornwall. Unusual x-ray photographs of flowers and seeds were produced out-of-hours. In 1944 Mike had married a fellow student (from the Arts Faculty), Bettine Guppy, of Cowes, Isle of Wight. With the arrivals of John (1946), Suzanne (1947) and Margaret (1950) the time had come to scale down to more permanent work. A year’s trainee-assistantship in General Practice in 1953, with Dr Astley Cooper in Upton-on-Severn, did not open up opportunities. By that time a fourth child, Helen, had arrived  and Mike made a very good decision which led to the rest of his professional life being devoted to work in Public Health. He loved working for children and his efforts were particularly appreciated in his help for the deaf.

His first post as a medical officer in this capacity was in the Isle of Ely in 1954. He enjoyed the freedom of set hours, giving time for his family – he was a wonderful father – and for his many interests. At home in Chatteris House he continued to process and enlarge his own photographs, he found the Fen landscape very photogenic. Evening classes in Chatteris gave Mike the opportunity to make his own pottery, much of which is still in use in the family.

A fifth child, Jennifer, arrived in 1955. To her we are indebted for the sorting of Mike’s negatives, including those of the windmills and watermills in which he was so interested.

The family’s move in 1959, to Ilfracombe in Devon, gave great scope for photography, since Mike’s work as a county medical officer and school doctor took him over much of North Devon and sometimes to the Cornish border. Many subjects caught the photographer’s eye: wrought iron gates, street lamps, church architecture and old buildings, water scenes and, not surprisingly, there are excellent photographs of his own children. Before the work as a doctor required very clean hands, Mike took a keen interest in “doctoring” old cars, owning at times an Alvis 1930 and an O.M. of 1931. His son continues the interest, doing the mechanical work needed for his Austins of 1923 and 1926.

Mike had many talents which he exploited to the full including radio (from the days of the cat’s whisker), carpentry, electronics, numismatics (the coins, too, were photographed), church organs and, above all, a great interest in music. He composed a sonata in 1942, as an engagement present for Bettine, and the wedding march for their marriage, played too for all his children. He made a clavichord with the guidance of a friend and studied the history of piano-making. A great interest was the rescuing and restoration of square pianos.

Mike retired from Public Health at the end of 1981, planning to continue his work with both photography and piano restoration, but unfortunately ill-health struck in May 1983 and in spite of a brave fight he died on December 1983 – yes, a man of many talents, exploited to the full – but no, he didn’t like gardening!