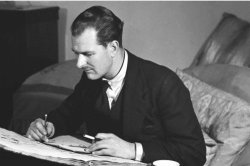 This temporary page provides biographical detail about Rex Wailes, the pioneer of the UK’s windmill repair movement. Now his collection has moved to the Mills Archive we will be able to offer limited access to interested individuals. To speed up this process we are appealing for substantial funds to help in stabilising some very vulnerable documents, listing and repackaging the collection. Please help us by visiting our donation page here.

Rex Wailes was born on 6 March 1901 in Hadley Wood, Middlesex, the elder son of Reginald and Florence Wailes. He was in fact christened Reginald, but always went by the name Rex. After leaving Oundle school, Northamptonshire, where history had been his strongest subject, he became an apprentice engineer to the firm Robey & Co. in Lincoln. After completing his apprenticeship he joined the family firm George Wailes & Co. in 1924.

George Wailes & Co., located on Euston Street, London had been started by Rex’s grandfather and manufactured a variety of machinery. Rex stayed with the firm until his retirement, taking over as manager in 1940 after his father had gone blind. The firm finally closed in 1960 due to a compulsory purchase for the widening of Euston Road.

It was while he was still at Robeys & Co. that Rex first grew interested in windmills. K.J. Tarrant was a retired engineer and member of the Newcomen Society for the History of Engineering and Technology, who was working on an old windmill. Tarrant asked Rex to photograph some Lincolnshire windmills for him, so at weekends Rex travelled by motorbike around the county photographing windmills. In his work Windmills in England (1948), Rex described how his interest in windmills was born:

One day, while I was photographing the big six-sailed tower mill at Coleby Heath, now demolished on account of the nearby aerodrome, the miller asked me if I would like to have a look inside. He showed me over from bottom to top and we finally ended up just under the fantail, looking out over a stretch of country that is said to have been settled by the ex-service men of Roman times. Here in the mechanism of the mill was part of the history of mechanical engineering in the solid, just the thing to whet the appetite of a budding engineer with a taste for the historical side of the profession. Since that day I have tried to look inside every mill I have come across, both at home and abroad.

From 1924, Rex was acting as a consultant for the repair of windmills, sometimes using men from the family firm to help with the repair work. In 1925 he was elected to membership of the Newcomen Society, and encouraged to continue studying windmills by older members E. Lancaster Burne, H.O. Clark, John Russell, director of Union Mills, Cranbrook, and Arthur Titley, all of whom shared his interest. Rex presented over forty papers to the society over the years, almost all about windmills. He was president of the society 1953-1955.

In 1930 Rex married Enid Berridge, a professional violinist. They had two daughters. Rex and Enid lived all their married life at Davidge Cottage, Knotty Green, Beaconsfield.

In 1929 an article on windmills appeared in the Daily Mail, written with the assistance of the secretary of the Society for the Protection of Ancient Buildings. The large number of letters received in response persuaded the SPAB to devote some attention to windmill restoration, and a Windmill Secretary was appointed, with Rex Wailes as Technical Adviser. This led in the same year to the repair of Arkley Mill, Hertfordshire and Stansted Mill, Essex – both supervised by Rex – and, in 1932, to the founding of the Windmills Section. Rex Wailes was a founder member, and remained closely associated with the Section throughout his life.

The results of many years of studying and surveying windmills were published in Windmills in England, 1948, and the longer work The English Windmill, 1954. Rex did not limit his work to the UK, but carried out surveys of mills in Spain, France, Barbados, Sweden and Finland. In the USA he was consulted for  the reconstruction of Robertson’s Windmill, Colonial Williamsburg, Virginia, a windmill on a creek off the Hudson River at Sleepy Hollow, and one at Flowerdew Hundred, Virginia. In the last case he introduced millwright Derek Ogden to the owners, who went on to become a professional millwright in the States.

After his retirement when the family firm closed Rex was made consultant to the Industrial Monuments Survey for the Ministry of Public Building and Works. He continued in this role until 1971, carrying out surveys of Britain’s industrial heritage alongside his more specialized mill work for the SPAB Mills Section. He was also Honorary Consultant to the National Trust and the Royal Commission on Historic Monuments.

Rex attended the First International Symposium of Molinology in Lisbon, 1965, presenting four papers. He presented papers to the first three such symposia, although declining to take part in the process that led to the foundation of The International MolinologicalSociety due to his age. At the Fourth Symposium (Matlock, Derbyshire, 1977) he was made an Honorary Life Member of the Society.

Rex became a Fellow of the Institution of Mechanical Engineers in 1937 and a Fellow of the Society of Antiquaries in 1951. He was chairman of the SPAB Mills Section 1971-1974 and made its first president in 1978. He recieved an OBE in 1973.

Rex was remembered for his generosity and care in encouraging and training younger mill enthusiasts. He died at his home at Knotty Green on 7 January 1986, aged 84.