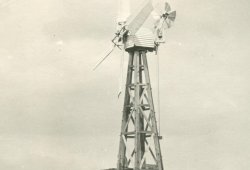 As the inventor of a windmill system, E. Lancaster Burne has a place in the development of the windmill.

Edward (Teddy) Lancaster Burne was born in 1869 and was apprenticed in the locomotive engine works at Nine Elms (London) under the locomotive engineer Strudley. In 1902 he set up as a consultant engineer in Victoria Street in London. This was a street of consultant architects and engineers until it was demolished in the 1950s and modern offices were built. From 1902, E. Lancaster Burne lived in Guildford, Surrey to the end of his life.

When the Newcomen Society was formed in 1920 he was elected to its Council and served as its President. He was on his way to the 1946 Summer Meeting of that Society on 12th June when he died. He was 75. He was working on wind engines in the period after the First World War and was the author of three patents:

It is his patent of March 1923 with which we are concerned. Here he designed a windmill system with reefable sails to generate electricity for farms and isolated buildings. The windmill tower was, to all intents and purposes, a smock mill. He adopted a Dutch method of construction in which each of the six sides was put together on the ground. The angles were created by shaped frames which were bolted together when the sides were erected.

Whilst we know of one wind engine which existed at his home in Guildford, the commercial examples were built and erected by English Brothers of Wisbech in Cambridgeshire. One can only speculate, but it is possible that Burne went to this firm because of their expertise in the creation of temporary buildings. They made ballrooms and marquees to be erected at parties and weddings. The prototypes of the windmill were prepared at their works.

E. Lancaster Burne was very friendly with John Russell, the miller of Cranbrook, Peter Davies of Folkestone, and Rex Wailes.