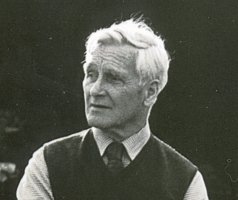 Hallam Ashley was born on 9 July 1900, and spent his early years in Nottinghamshire. His father and grandfather were both professional photographers; the family photographic and picture-framing business was established in Retford in the nineteenth century and moved to Sutton in Ashfield in 1904.

Aged almost 18, Hallam left home to sign up for the RAF, but received a telegram on his arrival at the camp to say that his father had died, and returned home to take over the family business. He sold this in 1921 to become a freelance photographer, taking a variety of jobs. One of his main areas of work was school photography for Binns Scholastic Photographers of Blackpool, which required long journeys throughout the country.

A meeting with mill expert Rex Wailes in 1926 was the beginning of both a lifelong friendship and a lifelong love of wind, water and steam mills. Rex asked him if he could photograph any interesting mills he came across in his journeying. Hallam went on to take many mill photographs for Rex’s books, and the two often spent short breaks together.

In 1929 Hallam married May McKelvey whom he had met in Northern Ireland, and they settled in Norwich, where Hallam was to live for the rest of his life. In the 30s he began to become well known as a photographer, with pictures in exhibitions around the world, and a growing amount of work photographing archaeological sites, excavations and similar subjects – much of this for the Castle Museum at Norwich. He was elected a fellow of the Royal Photographic Society in 1935.

Hallam had been planning to set up his own business, but this, along with his school photography, had to be shelved at the start of WWII. He volunteered for the RAF and was placed in the photographic section, so never learned to fly. His wife died in childbirth a few weeks before the end of the war, leaving him with two daughters to care for, and his photographic business to re-establish.

In the post-war years Hallam undertook a wide variety of work – photographing boats and bungalows for Hoseason’s holiday catalogues, wedding photography for friends, and continuing with his archaeological photography. In 1946 he began photographing buildings for the National Buildings Record (later the National Monuments Record), and this would become his main source of work until the 1980s.

Hallam worked closely with the Society for the Protection of Ancient Buildings, particularly the Wind and Watermill Section, of which he was a member from the late 40s. He married photographer Dorothy Baines in 1952. He taught photography for some time at the Norwich College of Further Education, and continued photographing until 1983, when ill health forced him to stop.