Synopsis: The book is divided into six parts.
Part One gives information on the first inventions of mills. The section is entitled ‘the utilisation of muscular energy (human and animal) for the grinding of wheat.’ Discusses how our ancestors ‘obtained their first grains’. From grinding grain manually, and animal powered systems to machinery. Includes illustrations such as one of an Ancient Egyptian statue showing two people grinding grain by hand (this statue can be found in the Louvre).
Part Two is a small section on the ‘transmission of movement.’ Essentially gives information on the political, or social movements in France. Particularly on Banality- the movement in France, which lasted until roughly the 18th century. This was a system in which the Banalités were restrictions in feudal tenure by an obligation to have peasants use the facilities of their lords. These included a required use-for-payment method, for example, of the lord’s mill to grind grain. Both the manorial lord’s right to these duties were called the droite-de-banalité.
Part Three gives information on water mills. Questions whether water mills existed before windmills. Gives other information, including diagrams on different types of water mills; watermills with a horizontal wheel, with a vertical wheel, a water wheel. <p> Includes illustrations and information on paper mills, specifically the Moulin à papier de Richard-de-Bas, near Ambert, Puy-de-Dôme, France. Gives mathematical equations detailing how different methods were used to transport water. Mentions Ancient Rome and aqueducts. Mentions Leonardo Da Vinci and his inventions.
Part Four gives information on wind mills; including family histories. The section mostly focuses on images of wind mills throughout history (illustrations, original illustrations, reprints etc.) <p> For example, the section includes a drawing of a drawing of the Port du Havre (Havre Port) on the Seine-Maritime France in 1583. Includes images taken from battles (e.g. Bataille de Jemmapes, Belgium 1792 as part of the French Revolution).
Focuses on windmills in Marseilles in particular. Includes a section on different types of windmills- including tour, pivot.
Discusses the different sails used –giving examples of the mills that used the various types- including those invented by Berton. Includes information on the interior of the mills. Includes an extract from an encyclopaedia of key terms.
Lastly, includes a section on the differences found in windmills (of the Tour type) specifically those found in France, Portugal, Greece, Spain, Finland, Holland and Poland. Includes illustrations.
Part Five gives information on various types of millstones. Includes diagrams and illustrations of different sections of the mechanisms associated with them; from primitive stages to the more advanced. Includes safety alarms and materials used for cultivation of crops and transportation.
Part Six gives information on social history. Gives illustrations of family coats of arms where mills, or other aspects associated with mills- for example other machinery, or grains, that have been discovered; briefly discusses what this symbolises. Also shows how far this reached- examples found across Europe- including Holland and even New York.
Includes a section on an anecdote from the author-about a strike around 1619-1690 and includes extracts from writings from the time – and the epilogue. 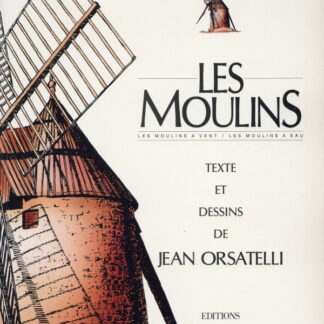