Watermills and military works on Hadrian’s Wall: excavations in Northumberland 1907-1913

A limited edition of 400 copies.

Hard cover with dust jacket. 198pp. Some marks of damage on the hard cover, but otherwise very good condition.

The excavations along the Roman Wall in Northumberland described in this book were intended for publication in ‘Archaeologia Aeliana’ as a companion to the work by F.G. Simpson (1913) ‘Excavations on the line of the Roman Wall in Cumberland 1909-1912 IN Cumberland & Westmorland Transactions, xiii, p297-397. The outbreak of the First World War disrupted the completion of the companion work as Simpson was engaged in aeroplane drawing during the war. Subsequent attempts from 1920-1947 to complete the work were interrupted by the need to undertake urgent excavations due to the threat of the wall being destroyed by quarrying. All the plates of plans and sectional drawings, and the 66 colloptype photographs were printed in 1913-1914 but remained in store at the publishers Titus Wilson & Son in Kendal.

A short survey of Gerald Simpson’s life and work

Part I: Watermills including: an introduction to watermills, waterwheels and machinery by Lord Wilson; the excavation of the Roman watermill at Haltwhistle Burn Head 1907-1908; the watercourse for a mill at the eastern abutment of Chesters Roman Bridge; additional notes on watermills of Byzantium, Athens and Rome; Willowford Bridge, a possible watermill site; wall pottery and mortaria; foundations and footings of the wall between Wilowford Bridge and Glisland 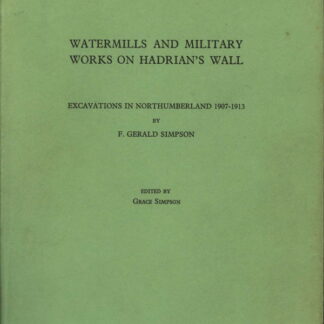 You're viewing: Watermills and military works on Hadrian’s Wall: excavations in Northumberland 1907-1913 £75.00
Add to basket