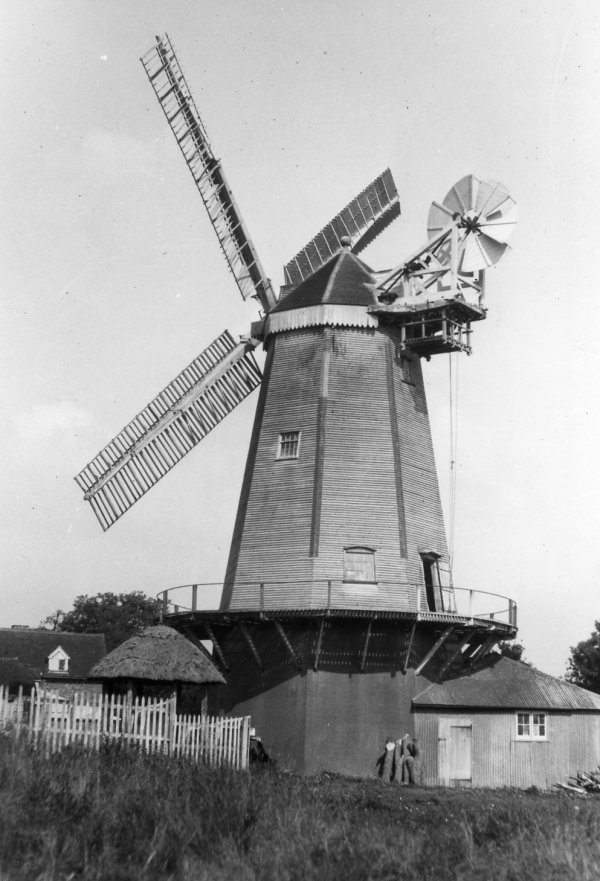 Belloc’s, Vincent’s or King’s Mill, as it is variously known, at Shipley is one of the largest and finest smock mills remaining in the country. It was built as late as 1879, at a time when windmills were becoming obsolete and a big mill like this would have been a risky venture, on top of the expense involved in its construction. To cut costs many of the timbers are second-hand, especially at the top of the mill (the money having by then run out), and some of the working components, notably the flour dresser on the spout floor, are stock parts.

It nevertheless manages to be a splendid example of the millwright’s art. The reused timbers appear to have come from the post mill known as Honeypoles which the new smock mill replaced. Perhaps because regional millwrighting trends had been forgotten to some extent with the decline of the windmill, the cap is an eight-sided cone with a scalloped petticoat instead of the usual Sussex dome. The mill has patent sails and fantail and stands on a two-storey brick base with a stage. It has an iron windshaft, wallower and great spur wheel but a wooden brakewheel and upright shaft. Three pairs of stones are underdriven. Because of its size the mill has room for plenty of auxiliary equipment and the spout floor in particular is a Mecca for lovers of old machinery, with a smutter, oat crusher and a flour dresser with feeder mechanism. There are also a second dresser on the stone floor and a jog scry on the top floor of the base.

Latterly engine-driven part of the time, the mill ceased work in 1926 but was maintained in good repair by the last miller, Peter Powell. In 1958 it was restored by the County Council as a memorial to the writer Hilaire Belloc, who owned it until his death in 1953 and used to call it “Mrs Shipley”. In 2009 the mill was closed to the public, although it remains for the time being structurally sound.