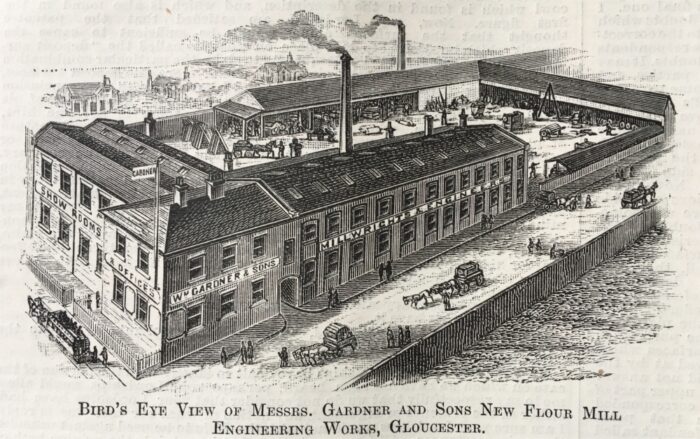 In The Miller (5 August 1895) there is a detailed account of this highly regarded firm, well-known in Gloucester and the West of England since the 1870s. The firm underwent several moves since it was founded around 1860, culminating in new premises in Bristol Road, completed when plant was installed in June 1894. Once established there Mr. Gardner took into partnership his sons, Charles and Alfred, styling the firm as William Gardner and Sons.

The fitting shop was supported on two rows of iron columns carrying a line of shafting and held all kinds of machines being made ready for work. Roller mills were evident in all stages of completion as well as centrifugals and ordinary reels, rotary scalpers etc. There was a fine lathe capable of turning 20 feet of shafting and of boring out large wheels. An overhead crane served the whole length of the shop.

Gardner devoted much time and attention to the grinding and grooving of their rollers in a separate department furnished with the latest design of grinding and grooving machines. Rolls were sent from all parts of England and Ireland to be grooved, where any spiral or shape, or number of corrugations could be readily matched.

1888 Advertisement emphasising Gardner’s work for mills of all sizes

Although the millstone had seen its day in flour milling, there were yet many industries in which grinding stones of different patterns and diameters were used and Gardner did a fair trade in these. The firm’s work with smaller mills featured in their advertising and is nicely illustrated with a tender from July 1894 in one of the Mills Archive collections offering the miller new equipment that would “make you a very pretty mill”.