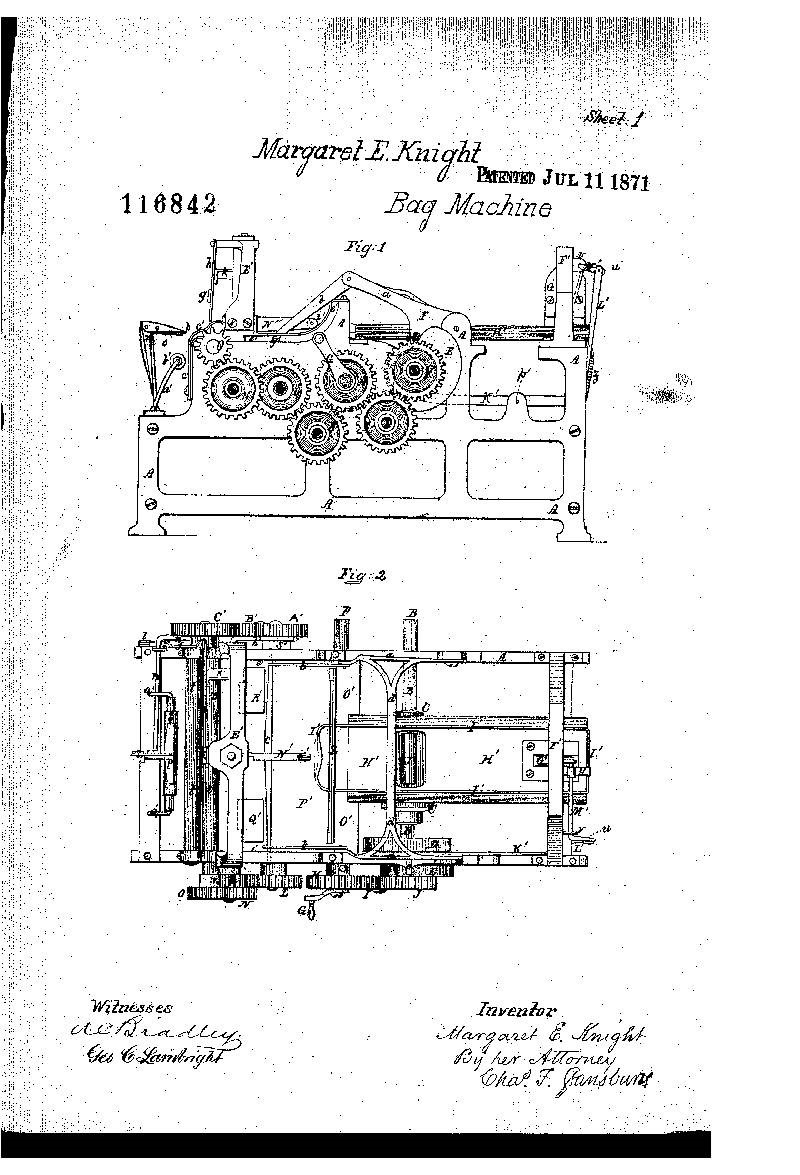 Margaret was born in York, Maine – one of a large family and was, according to historian Henri Petroski, known around town for making toys for her brothers, such as kites and sleds which she built by hand. Her father died when she was still a child which meant the family relocating to New Hampshire. Margaret had to start working long hours in a New Hampshire textile mill to help her mother make ends meet.

Mills were notoriously dangerous due to poor conditions and a lack of safety standards and Margaret, aged 12, witnessed a horrific accident when a shuttle broke loose and impaled a fellow worker.  Within weeks she had devised a way to stop this all too common an occurrence happening again, inventing a shuttle restraint system that would become a standard fixture on looms across the country. Unfortunately, as a child she was not aware of the patent system and failed to register her invention, thus receiving no compensation for her efforts.

However, this device was only the first of many of her inventions. Margaret left the textile mill in her late teens, working her way through several jobs to help support her family. After the Civil War she found work in Massachusetts at the Columbia Paper Bag Company making bags by hand. It was here that she made her name inventing a paper bag machine, which could automatically cut, fold and glue flat-bottomed paper bags. Up to then bags were envelope-style, with the bottoms glued together in a v-shape which limited how much the bag would hold.  These flat-bottomed bags transformed the industry. An updated version of her machine was still in use at the end of the 20th century.

Today these bags are found everywhere, from McDonalds to local market stalls!  Of course, this revolutionised the paper bag industry by replacing the work of thirty people with one machine!  The invention became used worldwide.  Also, a side-effect was the fact that retailers quickly realised the value of being able to promote their goods by advertising on the side of the bags.  Today, nearly two hundred years later, paper bags are coming back into fashion as they are more eco-friendly than the plastic bag.

Fully operational by 1868, this invention had drastically improved both the company’s output and the uniformity of the bags. Taking her previous experience into account. Margaret realised she had to apply for a patent.  Unfortunately, one Charles Annan, a co-worker, tried to steal her design. This was taken to court, where he argued that she “could not possibly understand the mechanical complexities of the machine” – but Margaret then produced the original blueprints of the machine’s designs.  She won her case.

Margaret now was in a position to co-found her own paper bag company in Hartford, Connecticut, called the Eastern Paper Bag Company.  She never stopped innovating, and went on to patent more than 25 inventions, ranging from a sole-cutting machine for shoemaking to a compound rotary engine. When she died in 1914 she was honoured in a local obituary as a “woman Edison.”

In 2006 Margaret was inducted into the Paper Industry International Hall of Fame; by then over 7000 machines throughout the world were producing Margaret’s flat-bottomed bags, with major suppliers located in the US, Germany, France, and Japan.  There is simply no end to their use; from supermarkets, department stores, bakeries, and even at home being used for recycling waste!