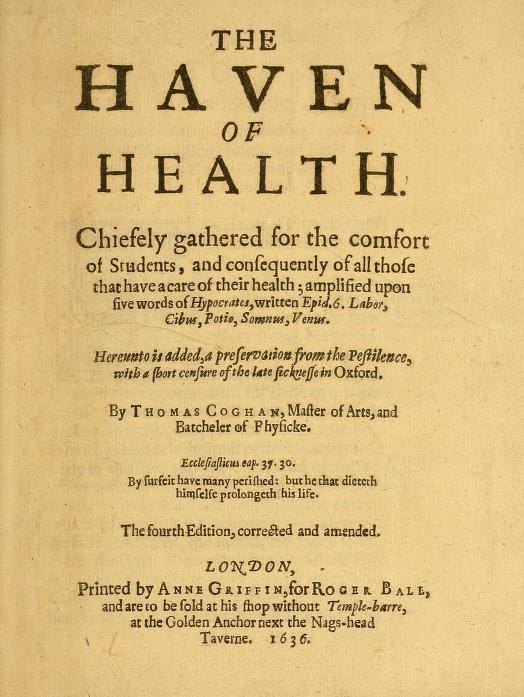 Thomas Cogan (Coghan) observed in his book The Haven of Health (published in 1584) that:

Browne bread made of the coarsest of wheat having in it moch branne, fylleth the belly with excrements, and shortly descendeth from the stomacke. And beside, that it is good for labourers, I have knowne this experience of it, that such as have beene used to fine bread, when they have beene costive [constipated?], by eating browne bread and butter, have beene made soluble.

In other words, brown bread is good for you.

However, he had much more to say on bread and living a healthy life.  Thomas Cogan was born c1564 in Chard, Somerset.  He gained a medical degree at Oxford whilst working as an Anglican canon at Exeter and was appointed Chief Master at Manchester Grammar School in 1575.  Cogan concerned himself with the welfare of others.  Whilst in Manchester he wrote The Haven of Health: Chiefly gathered for the Comfort of Students and consequently all those who have a care of their health.  This was essentially a self-help guide for students and all those interested in leading a healthy lifestyle.  It continued to be published in new editions long after his death in 1607.

The Haven of Health is full of encouragement and promotes health and wellness by eating the right kinds of food, prepared in the best way.  He constantly refers to the work of other Renaissance writers such as Galen and Andrew Boorde.  Sometimes, he poses a rhetorical question to test the theories of the day, leaving the reader to make up his own mind whether to follow the advice.  Cogan covers the benefits and pitfalls of eating a great many foodstuffs in this book.  He includes several sections on cereals that were used for making bread, beer or to feed pigs and horses.  He also provides advice on the number of meals that should be taken and what to have for breakfast including bread.

In his opinion, the best bread was made in Yorkshire:

I thinke, we have as good Wheat in England, both red and white, as may be found in any Countrey in all Europe, and as good bread is made thereof, especially that of Yorke, which they call Maine bread.

Maine bread is a contraction of pain-demaine or the Bread of Our Lord, so named because a figure of Christ was imprinted upon it.  The bread was a York delicacy made from the finest white flour.  It was given out to dignitaries during the Feast of Corpus Christi, which celebrated the Sacrament of Bread and Wine.  The York Mystery Plays took place at the same time.  The Guild of Bakers in the City of York presented the play of the Last Supper.

The best and most wholesome bread is made in the following way:

That bread to bee best, which is made of pure flower [flour] of good Wheat, sufficiently leavened, somewhat salted, well moulded, well baked, neither too new nor too old: that is to say, after Doctor Bord, that it be at least a day and a night old, and not past foure or five dayes old….

Cogan had a conflict of interest because he believed that all kinde of bread made without leaven is unwholsome, descendeth slowly from the stomack… Wherefore cakes of all formes, Simnels, Cracknels, Buns, Wafers, Fritters, Pancakes, and such like, are by this rule rejected.

However, he was aware that the best bread was considered to be Manchet which was eaten by the nobility and gentry.  This was unleavened bread and baked on a stone rather than in the oven.  So Cogan came to the conclusion that the key to good bread was to make sure that it was well baked but not burned.

Whether bread be made in forme of Manchet, as is used of the Gentility, or in great loaves, as it is usuall among the Yeomarie, or betweene both, as with the Franklings, it maketh no matter so it be well baked. Burned bread, and hard crusts, and Pasticrusts,doe engender adust choller, and melancholy humours.

Finally, he agrees that nothing beats the smell of new baked bread for improving your mood

The savour of new bread is very wholsome, and reviveth one out of a swoone.

The Haven of Health: the Beginners guide to healthy living in the Renaissance.  Who was Thomas Cogan? http://exhibits.usu.edu/exhibits/show/-havenofhealthtitle/thomascogan/who

E-book.  The Haven of Health: Chiefly gathered for the Comfort of Students and consequently all those who have a care of their health.  By Thomas Coghan Master of Arts and Bachelor of Physicke. Fourth edition, corrected and amended.  Printed by Anne Griffin for Roger Ball and are to be sold at his shop without Temple-barre at the Golden Anchor next to the Nags head Taverne, 1636 https://archive.org/details/havenofhealthchi00coga/page/n5/mode/2up

York Mystery Plays https://en.wikipedia.org/wiki/York_Mystery_Plays – Thomas Cogan may well have visited York for these famous plays that are still enacted today.