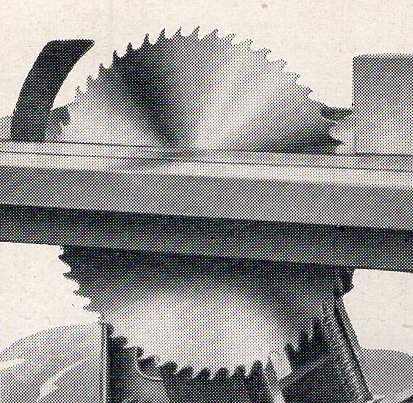 Sarah Tabitha Babbitt (12 August 1779-10 December1853) is believed to have invented the first circular saw for use in a sawmill between 1810 and 1813. This account has been vigorously challenged as “Shaker propaganda” and we would appreciate further information.

As a young woman, Tabitha Babbitt was a weaver in Harvard, Massachusetts. She used to watch the workers at the local sawmill.  Observing them use the difficult two-man whipsaw, she noticed that half of their motion was wasted. It had two handles which two men would pull from side to side. However, the saw only cut the wood when it was being pulled forward. This meant the second or reverse pull was fairly useless other than to get the saw back to starting position which was a waste of energy.  Tabitha proposed creating a round blade to increase efficiency. Eventually she came up with a prototype, attaching a circular blade to her spinning wheel, using the pedal of her wheel to power it. As the blade spun, no movement was wasted. The circular saw was connected to a water-powered machine to reduce the effort to cut lumber, meaning that wood could be cut faster with half the manpower. The first circular saw she allegedly made is in Albany, New York State USA. A larger version of her design was later installed in the sawmill.

But – Tabitha was a member of the Shakers, a Christian sect founded circa 1747 in England who had emigrated and settled in revolutionary colonial America.  Their core beliefs centred round a perfect society, created through communal living, gender and racial equality, pacifism, confession of sin, celibacy and separation from the world.  As such, they valued hard manual work, a simple lifestyle, and thrived on the forestry industry.

However, their beliefs prohibited any member applying for patents as they believed intellectual properties should be shared by the community with no restriction. Because she did not patent it (and according to wiki the reference to her invention exists only in Shaker lore), there is controversy over whether she was the first true inventor of the circular saw.

Two French men patented the circular saw in USA after reading about her saw in Shaker papers. One of the patentees, Stephen Miller argues she wasn’t the first inventor based on the date she joined the sect. He contended that it was invented at Mount Lebanon Shaker Village by Amos Bishop or Benjamin Bruce in 1793 – or not by a Shaker at all.

Samuel Miller obtained a patent in UK for a saw windmill which supposedly used a form of a circular saw in 1777 though the type of saw is only mentioned in passing, making it seem as though it was not his invention. Walter Taylor a few years later in same area of the United Kingdom seemed to have types of circular saws at his sawmill but in fact he only ever received patents for improvements to blockmaking.

However, it appears Babbitt’s circular saw design was much larger than other circular saw mechanisms and enough modifications were made to differentiate her invention from the rest. Her basic design was also the one that soon was copied at various American sawmills, popularising the use of circular saw in mills.

Tabitha was also credited with improving the spinning wheel head, inventing a process to manufacture false teeth and inventing a process for manufacturing the then semi-revolutionary type of nail known as “cut nails” which replaced forged nails, a claim to fame she shares with a few other inventors including famed inventor Eli Whitney.

She is not forgotten – As recently as 2015, inventor Sam Asano took up her case. Named by Massachusetts Institute of Technology as one of the 10 most influential inventors of the 20th century, Sam was outraged when he could not find her name in the “National Inventors Hall of Fame” . He wrote in a very indignant manner on Tabitha’s behalf to the organization “Invent NOW” who manage the Hall of Fame, only to be advised that as she had no patent, she had no place in the listing. He later noted that Benjamin Franklin (American polymath, one of the founding fathers of USA, leading writer, printer, philosopher, politician, postmaster, scientist, inventor ………………..)also didn’t believe in patents – and he is not there either.