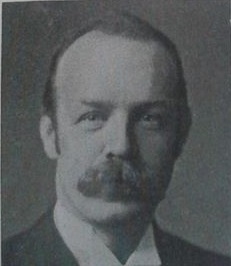 The Duffield Family Collection is comprised of a scrapbook of newspaper cuttings collected by W. L. Duffield during his lifetime. These articles, collected mainly from The Miller and Milling during the period 1885-1915, help reveal what concerns millers had during the transition to roller machinery that took place during the end of the 19th century. Also preserved is an article written by Duffield for The Miller. It is entitled ‘Early Experiences of An Old Country Miller’ and this article, along with details from the Duffields website, means we able to tell his story…

William Lant Duffield was born to William Gallant Duffield and Sarah Ann Lant on 26 January 1869. Milling became a part of his life at a young age when he would visit his grandparents at Tibenham windmill.

In 1884 he started work as an apprentice at Tasburgh Mill and it was here that he appears to have started collecting articles on milling. The first entry in his scrapbook comes from 1885 and is concerned with ‘Flour Mills and Insurance’. Aged only 16, he appears already to have been collecting as much information about his chosen profession as he could.

After spending four years at Tasburgh Mill, he moved on and started looking for a position in a larger mill. However, in his own words, those positions ‘were not easy to obtain as there were then big imports of flour from the roller mills on the Continent and also from America’ (Duffield, p.111). He saw the coming of roller machinery first hand and struggled, as many other millers and labourers did, with the fact none of them were trained or had experience with these new machines. The only role he could eventually get at a roller mill was that of flour packer. This job was with Messrs. Walmsley & Smith of Barrow and despite only being a flour packer, Duffield confessed that ‘I had a good time there’.

This may have been Duffield’s first foray into the roller milling industry, but it was not his last. However, upon leaving this position, he returned to mills with stones rather than rollers. Firstly he worked in a watermill at Harewood, and then in a steam and wind mill in Milbarton. The work at Milbarton was profitable until ‘about 1892 or 1893, when two or three of the largest mills in our district were remodelled to rolls when they took most of the flour trade away from us’ (Duffield, p.113). It was becoming increasingly apparent that to survive, a mill would have to adapt and install roller machinery. Indeed, articles in Duffield’s scrapbook from 1891 discussing the different roller surfaces suggests that Duffield himself may have realised this and was preparing himself.

Around 1893 when Milbarton was losing out to competition from roller mills, William Lant Duffield decided to leave and start his own business. He does not state the reasons behind this decision but one can infer from the other event that took place in his life in 1893; he married Florence Rachel Fuller. Now in the role of husband, Duffield presumably wanted to provide for his family and be his own master. He hired Mattishall Mill on a four year lease, but did not yet turn to the new roller machinery, despite seemingly being well acquainted with it. Combined with the milling journals he clearly subscribed to and kept, Duffield also attended the 1892 Millers’ Exhibition at the Agricultural Hall, London. He described this as an event ‘of great importance’ that ‘had a big effect on the trade, especially on the small millers’ (Duffield, p.113). Writing in 1946, he could still remember ‘starting by early train from Norwich, spending a good time at the exhibition, going to New Southgate to see relations, coming home by night train to Norwich at 2 a.m., and walking the six miles home to begin work at 6’ (Duffield, p.113).

The first roller mill Duffield leased was actually Tasburgh Mill, the watermill where he had spent his apprenticeship. He was offered this water and steam mill in 1896. Since his apprenticeship, a combination flour plant had been installed so he started his roller flour industry with a double set of Turner 25 by 9 rolls. Despite all the knowledge he had gained concerning roller machinery, he was still in need of advice as the flour he was producing, although good, was very dark. He visited a friend who advised he ‘put in a double mill for the 1st and 2nd breaks and with other alterations the plant did very well’ (Duffield, p.114). So well in fact that he expanded adding more Turner rolls to this mill, leading to the premises becoming ‘cramped and short of room’. So it was that in 1906 he leased Saxlingham Thorpe Mill too as it was ‘a good large building’ with ‘rather more water power’ (Duffield, p.114).

When Duffield starting milling on his own in 1892/3, many of the articles he collected and kept were concerned with fires in mills. Fire was a great threat to millers and Duffield was clearly concerned about protecting his mill as best he could, something he appeared successful at as there are no cases of fire reported in his mills. However, this did not mean he was immune from Mother Nature. In 1912 Saxlingham Thorpe mill was badly flooded when the River Tas burst its banks, along with many other rivers in the region. The boiler was immersed and damage was found throughout the mill.

When war broke out in 1914, William Lant Duffield’s eldest son, William Charles Duffield, went away to fight in Egypt and Palestine. Europe was in turmoil, as were Duffield’s finances. In 1915 he left Tasburgh Mill and then a year later he was declared bankrupt and was forced to leave Saxlingham Thorpe Mills too. Nevertheless, he recovered from this setback and by 1917, he had leased Tharston Mill which his son and daughter, Harry and Rachael Duffield, helped run.

Moreover, the Duffield’s would return to Saxlingham Mill when they re-leased it in 1928. Eight years late they were able to purchase it for £1,100. W. L. Duffield & Sons Ltd also became incorporated in 1936, showing the business recovering from the difficulties it suffered during the First World War.

Not long after this, the Second World War broke out and this time, it was William Charles Duffield’s eldest son, Terance W. Duffield (right) who joined up to fight as a member of the RAF. As soon as war had broken out, Duffields, and likewise many other companies, were informed that all grain stock would come under governmental control, starting from 1 September 1939. This was not the only change the company would undergo during this period. In 1940, they started producing animal compound feed at Saxlingham mill. Indeed, between 1942 and 1970, it was all they produced as the Saxlingham Thorpe flour mill was closed down due to hygiene reasons. However, thanks to their expansion and diversification, the company survived this blow.

William Lant Duffield himself would not see this flour mill re-open in 1970. He died on 30 May 1962 leaving a successful family business behind. The company itself continued producing both flour and feed for many years until 1991, when the decision was made to stop producing flour and focus solely on producing animal feed. This animal feed company is run today by William Lant Duffield’s great-grandson, Alistair Duffield.

So William Lant Duffield’s legacy still lives on today. His company survived two World Wars, bankruptcy, flooding, and changes to the industry. The man who studied his trade and collected details about the developments taking place within it saw Duffield’s through the first major change to roller milling, whilst his children, grandchildren and great-grandchildren helped see the company through the rest.