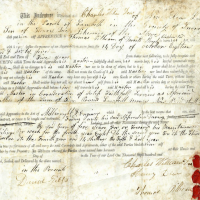 This Apprenticeship Indenture marks the birth of a millwright.

This Gem is an indenture between the millwright and engineer Thomas Pilbeam, and his new apprentice, Charles William Dew. Dated to the 14th October 1865, it agrees that Charles Dew will work for five years, and promises his good and lawful behaviour. In return he will be taught ‘The Art of the Millwright and Engineer’. It also agrees to an increasing rate of pay as his skills and abilities develop throughout the apprenticeship. He begins on six shillings a week and ends on fourteen shillings a week in his fifth year of employment.

Based on the subsequent letter of reference from Thomas Pilbeam, Charles Dew had a successful apprenticeship. His first reference is dated to the end of his apprenticeship in 1870. In it Thomas describes Charles as his late apprentice and that

‘I am sorry to say that I have not work enough at present to keep him employed.’

His second letter of reference shows that Charles was able to gain employment. It explains that he worked as a millwright and engineer at West Medina Mills for six months, leaving to work on another mill under construction. It was written by the foreman at Medina Mills, in it Charles is described as having ‘given full satisfaction’.

Gem from the Small Donations Collection