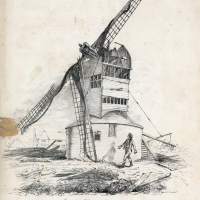 “It was then that she heard the bloodcurdling screams of her stricken husband.”

This contemporary sketch was sold following a miller’s brush with death. The caption describes what is happening in the picture, as well as the reason for the sketch:

Toot Hill Windmill
In the Parish of Stanford Rivers, Essex,
Shattered by Lightning, June 18 1829,
This sketch sold for the benefit of the sufferer Joseph Knight and his family consisting of a Wife and seven children one of whom is deaf and dumb

On Thursday 18th June 1829, a vicious thunderstorm spread its way across the East of England. With rain lashing down, wind whipping across the landscape and the sky filled with the bellow of thunder, all it took was one bolt of pure electricity to cause immense damage. Joseph Knight, the miller of Toot Hill Windmill in Essex, was unfortunate enough to be in his mill at the time of the storm, when a lightening bolt caused a catastrophic accident. The miller’s wife recalled hearing a ‘hissing noise and a sound like artillery‘ as the lightning struck the mill, and then an overwhelming smell of sulphur. Suddenly she heard the bloodcurdling screams of her stricken husband, and running out to the mill, she found him in a horrific state.

The poor miller had been caught in the destruction, and his wife found him with his right leg almost completely detached from his body.

His family immediately called for Mr Potter, the local surgeon, and his leg was amputated straight away. The surgery must have been performed on the floor of the mill!  His hair had also been badly singed and he had multiple injuries to his face, though luckily he survived. The second victim of the strike, the mill itself, was not so lucky. The lightning hit the mills sails, cutting two of them off in the process. It then travelled down into the interior of the mill, completely demolishing it from the inside. Its roof and weatherboarding were blown clean off.

The Toothill engraving above contains a lot more detail of the explosion and injuries. Windmills in exposed places were often the victim of lightning strikes, many of which resulted in a fire consuming the mill.

Categories: Art and Artists, Disasters, Gems of the Archive