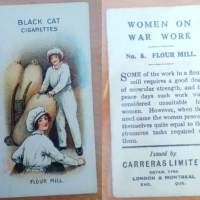 “Some of the work in a flour mill requires a good deal of muscular strength, and in peace days such work was considered unsuitable for women.”

“Some of the work in a flour mill requires a good deal of muscular strength, and in peace days such work was considered unsuitable for women. However, when the need came the women proved themselves quite equal to the strenuous tasks required of them.”

So declares the 1916 cigarette card issued by Carreras Limited, producer of “Black Cat Cigarettes”, along with an illustration showing two women working in a flour mill. The women are depicted moving heavy flour sacks – heavy manual work that was typically reserved for men. These cards were used to promote a particular brand, while also keeping to the shape of the cigarette box.

During both First and Second World Wars, the majority of men of working age were away fighting, and it was left to women to keep the country running. This meant that they had to take on what had been traditionally seen as male roles, such as heavy manual labour. Despite initial doubt as to whether women would be capable of such tasks, they excelled: proving themselves fully competent and efficient, and helping to break down the perception of what was women’s work, along with preconceptions of their capabilities.

The work of women in the First World War proved to be instrumental in the case for women’s rights. Their patriotic contribution to the war prompted the inclusion of women’s enfranchisement in the 1918 amendment of the Representation of the People Act, finally allowing women over the age of 30 who met certain qualifications the right to vote. While this move did not give women immediate equality, it was an important step on the path towards full political rights.