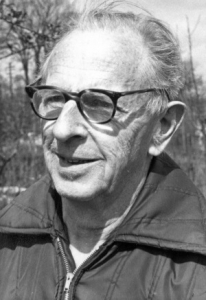 Stanley Harman Freese was born in 1902. He first became interested in mills when on holiday at Darsham, Suffolk in 1923, and cycled extensively throughout England sketching and photographing mills and other features of the countryside. Some of these journeys were described by him in his chapters of In search of English windmills (Cecil Palmer, 1931), which he wrote with R. Thurston Hopkins. His other main publication on windmills was Windmills and millwrighting (Cambridge University Press, 1957). He also carried out some repair work on Brill and Pitstone mills with his good friend James Venn.

Stanley was also interested in town planning, publishing a novel The Ten year plan: a dream of 1940 (Cecil Palmer, 1932) on the subject, and co-founded the English Linear Cities Association.

Stanley lived at South Heath near Great Missenden, Buckinghamshire. On retiring in 1964 he moved to Wenhaston, Suffolk, which allowed him to devote time to studying Suffolk windmills. This led to collaboration with Brian Flint, who was also researching windmills in the area, and book reporting their findings was planned. This was completed by Brian after Stanley’s death.