Windmills of Central Europe and beyond

When the Berlin Wall came down in 1989, the scene was set for the decline and eventual disappearance of Communism across most of the countries of Central and Eastern Europe. With this enormous shift in European politics came opportunities, untrammelled now by bureaucratic interference, for visiting countries that had been all but closed to foreigners. Curious  westerners were understandably keen to take advantage of this access to the East, and among the many aspects of life peculiar to the states of the old Eastern Bloc now open to scrutiny was the legacy of industrial practices, by now long out of fashion in the West but which had lingered in the East. At the lighter end of the scale for industrial buildings, still then much in evidence in Central Europe, lay traditional mills – both windmills and watermills. In taking the windmill as its chosen subject, this book offers us a visual chronicle for the fate of a random sample of such mills seen across Central Europe in the years directly after 1989. It builds upon the local knowledge gathered by intrepid travellers long before that pivotal year and hopes to facilitate our appreciation today of this singular feature of European industrial heritage.

From Germany into Poland

Beyond Poland into Ukraine

Most of the photographs are the intellectual property of the author. The windmills pictured are a mixture of the principal types of mills encountered in most European countries. The dominant form of mill is the post mill (or its close cousin the paltrok mill) but smock mills and tower mills also feature on the ground and more so than the proportions of their images selected here might suggest. 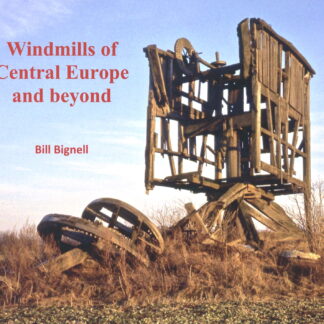 You're viewing: Windmills of Central Europe and beyond £35.00
Add to basket