Stronger than a hundred men

First Edition Hardback in good condition with good dust jacket . 157mm x 27mm x 239mm. Like many apparently simple devices, the vertical water wheel has been around for so long that it is taken for granted. Yet this “picturesque artifact” was for centuries man’s primary mechanical source of power and was the foundation upon which mills and other industries developed.

Stronger than a Hundred Men explores the development of the vertical water wheel from its invention in ancient times through its eventual demise as a source of power during the Industrial Revolution. Spanning more than 2000 years, Terry Reynolds’s account follows the progression of this labour-saving device from Asia to the Middle East, Europe, and America-covering the evolution of the water wheel itself, the development of dams and reservoirs, and the applications of water power. 453 pages. 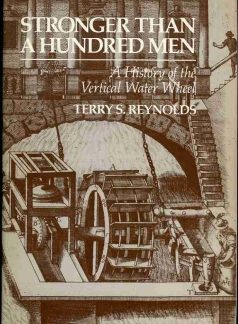 You're viewing: Stronger than a hundred men £45.00
Add to basket