London millwrights; Masters and journeymen in the late 18th and early 19th centuries

A4 card covers 36pp colour and b/w illus
This study traces the pivotal role of the millwright in the London area during the early industrial revolution when horses, wind and especially water, were the primary power sources. They first came to public notice as a London Society of Journeymen in 1795 on account of a four-month strike at the Old London Bridge waterworks with its huge wheels and millwork driven by the tide under the arches as illustrated in the cover. A few years later, this ‘union’ was the subject of an attempt by their masters to outlaw it, leading to the passage of the infamous Combination Act of 1799, banning all such clubs 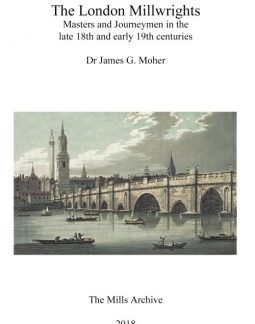 You're viewing: London millwrights; Masters and journeymen in the late 18th and early 19th centuries £10.00
Add to basket