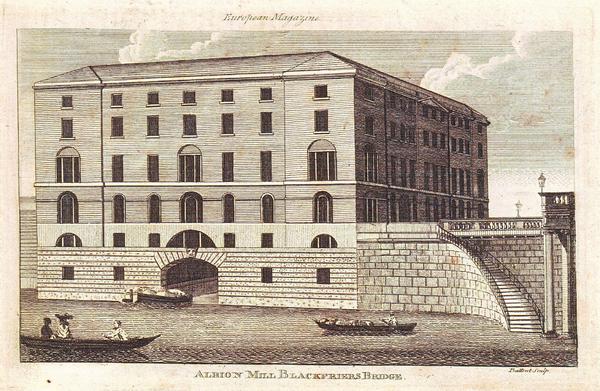 Those who have heard of the famous Scottish engineer, John Rennie (1761-1821), will probably remember him for his civil engineering achievements at the turn of the nineteenth century, such as the building of new London and Waterloo bridges. In fact, like many engineers of those days, Rennie also made considerable contributions to the development of mechanical engineering throughout Britain and Ireland. From 1784, he was responsible for devising and installing the pioneering system of iron millwork which harnessed the revolutionary Boulton & Watt ‘Sun and Planet’ rotary engines of the ill-fated Albion Flour Mills on the banks of the Thames at Blackfriars Bridge.

Known for its ‘Sun and Planet’ mechanism, it converted the linear motion of the engine rod into rotary motion. This worked through two medium-sized iron gear-type iron wheels, shaped to ensure smooth meshing as they transmitted the power to the engine flywheel. It revolutionized the use of steam engines for corn mills and a host of manufacturing processes whereas the early reciprocating engines could only pump water from mines in unsuitable jerky, up and down, motions.

A mill for grinding paints as noted by John Rennie on his visit to Liverpool in 1784. He commented that the constant turning of the stone wears it more on the outside than the middle, causing it to become rounded.

J.G. Moher, The London Millwrights, (The Mills Archive, 2018), pp.14-15. This publication has an illustrated summary of Rennie’s involvement in the Albion Mills and the historical context of his millwrighting career. Copies are still available (£10) from the Mills Archive here.

However, Rennie would be the first to systematically use iron in millwork. Here his study of mathematics and especially, his geometric understanding of curves and motion, which Professor Robison pioneered, came into play. Out went the traditional wooden gear wheels with pegs on the rims to engage the other lantern-shaped wheels of the millwork train. They were most inefficient, slipping and sliding and losing much of the power they had to transmit, through friction. Instead, Rennie devised geometric cycloid and epicycloid-shaped metal wheels, which were then chipped and filed to engage smoothly and securely.

Other innovations at the Albion Mills included having so many millstones, (twenty-six originally envisaged for the three engines), worked from a central shaft.  Their layout in a continuous line was also described as ‘totally different to that in use, for corn mills driven by water’. The job of dressing so many millstones at a time, as the intense heat baked damp meal into the furrows, was another challenge, as was the laying out of much larger than traditional millstones in a continuous line.

No less than Sir William Fairbairn F.R.S. (1789-1874), gave Rennie the credit for this. Fairbairn, a millwright by training, but later a major Manchester-based engineering employer wrote a couple of volumes on Mills and Millwork. He described Rennie’s work as ‘the greatest advance in the application of gearing’. Even John Smeaton, who visited the Albion Mills, pronounced them ‘the most complete, in their arrangement and execution, which had yet been erected in any country’.

The engine in the steam mill at Upminster was manufactured by Matthew Boulton and James Watt at their Soho works in Birmingham. It was a modified Bell Crank engine rated at 6 hp and had a 10ft diameter flywheel. It drove two pairs of millstones and the drive shaft was extended into the windmill to run auxiliary machinery. This picture is thought to have been taken by Rex Wailes.

Just two engines had been erected by 1788, when Rennie left to set up his own master millwright workshop nearby in Blackfriars. John Farey, the famous author-engineer left a detailed contemporary description of the second one: ‘The engine has two fly-wheels, and two pairs of sun and planet-wheels… Each of the axes of these two sun-wheels and fly-wheels gave motion to a separate flour-mill, containing 5 pairs of mill-stones…’ A print showing the whole set-up was included by Professor Robison in his Encylopedia Brittanica articles from 1797.

Boulton and Watt engine in the steam mill at Upminster – Images and documents (millsarchive.org)