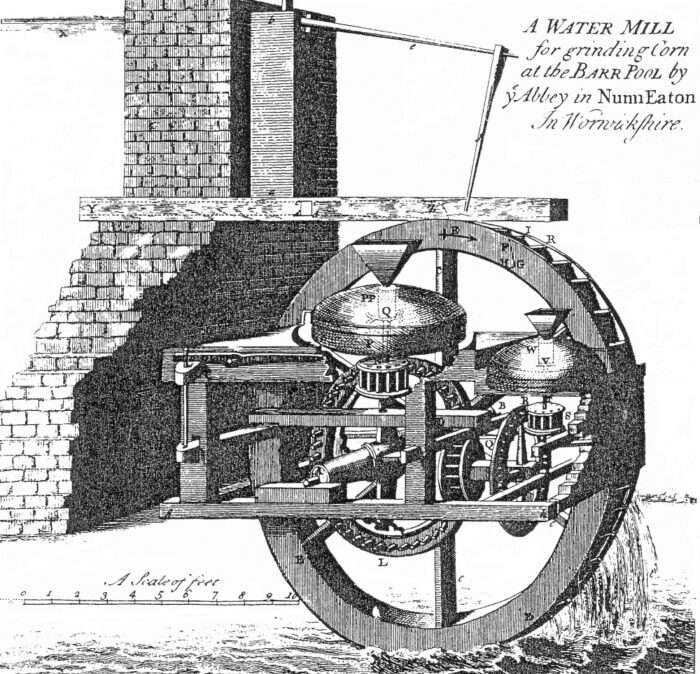 The Town Mill at Lyme Regis, Dorset, which was rebuilt after being destroyed by fire in the siege of the town in 1644, during the Civil War, had two waterwheels each driving a pair of millstones in 1675; in 1728 a ‘treble malt mill’ was added.  Survival of a treble mill layout is extremely rare, one of the last complete examples being Arden Mill, a small estate mill in a remote location in the North York Moors.

Where there were two or more mills under one roof, the waterwheels that drove each pair of stones could be located side by side in a central wheelpit, at both ends of the building or in line, either one behind the other, or partially overlapping. Larger waterwheels were required to provide sufficient power to run two or more pairs of millstones, usually through spur gearing which, by the mid 18th century, dominated gearing layout in both watermills and windmills.

Post mills also continued to be built or rebuilt in those areas where timber-framing traditions were strong.  In some post mills, such as at Cromer, Hertfordshire, where parts of the structure have been tree-ring dated, the post is older than the framing of the body, indicating that the mill has been rebuilt but that the original post has been reused.

Developments were also made to the gearing within post mills to enable them to drive two pairs of millstones, the stones being over-driven from the head or brake wheel and also a tail wheel mounted on the windshaft.  This method of driving two pairs of stones is a form of layshaft drive, which is also found in watermills.

Outwood Mill, Surrey, a typical post-medieval post mill, originally built c.1665 with a roundhouse at two pairs of stones, one in the head and one in the tail (Photo H. E. S. Simmons, Mills Archive Collection, HESS-0995)