A wind-powered corn mill in the historic county of Hertfordshire, England. 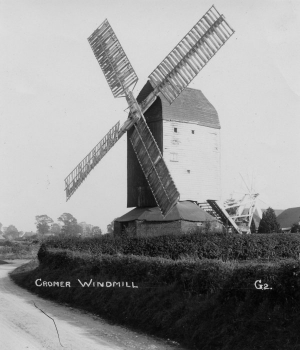 A reference to a windmill standing in the parish of Ardeley in 1222 was recently discovered by Hertfordshire mill historian Cyril Moore. The site of the present mill is clearly an old one, and archaeological excavations of the mound on which it stands have shown that the mound was artificially constructed, although this did not occur earlier than the 16th century. Cromer's early windmill was said to be "in ruins" in 1374 but must have been rebuilt prior to 1576 when it was sold to William Crane. The Crane family were still involved with the mill in 1719, and evidence from the mill's timbers suggest that the structure had again been rebuilt a few years previously. An inscribed date of 1681 on a repositioned timber could record this event.

The mill is depicted as an open-trestle post mill on Dury and Andrews' map, published on 1st May 1766. The original mill house, whose site can still be traced and which survived into the era of the photographic record, is also depicted on this map a short distance south of the mill. In the late 18th century the mill was owned by the Pearmans; its ownership passed into the possession of the Munt family in 1822. The Boorman family owned and operated the mill from 1869 until 1898, when it was purchased by Joseph Scowen. The last miller was Joe Pepper, and the mill last worked by wind in about 1923. A pair of engine-driven millstones on a hurst frame outside the mill probably continued to be used afterwards, and were still in existence in the 1960s.

Restoration of the mill was achieved in the late 1960s by a local group of volunteers who launched an appeal for funds to save it. In 1967 the mill passed into the ownership of the Hertfordshire Building Preservation Trust which continues to maintain it in excellent condition. The final phase of restoration, which left the mill in turning order, was completed in 1998. Due to its restricted site and the proximity of roads and high hedges, the mill is unable to work, although the sails sometimes rotate in the wind.

Cromer windmill is a fairly typical East Anglian post mill with patent sails, two pairs of underdrift millstones in front of the crown tree, and a ladder-mounted fantail with eight blades. It displays some unusual features, such as a roof which is ogee-shaped in profile, and an octagonal roundhouse which appears to be a north Hertfordshire peculiarity. The double-sided patent sails are unique in design, with shutters passing in front of the sail whips, giving a distinctive appearance. The cast-iron fantail gearing is compact and features an ornate handle for hand operation. Historical evidence indicated that a "bolter" type of flour dresser was once fitted, and this was reconstructed in the repairs of 1998.

Cromer windmill is Grade II* Listed and looked after by the Hertfordshire Building Preservation Trust.