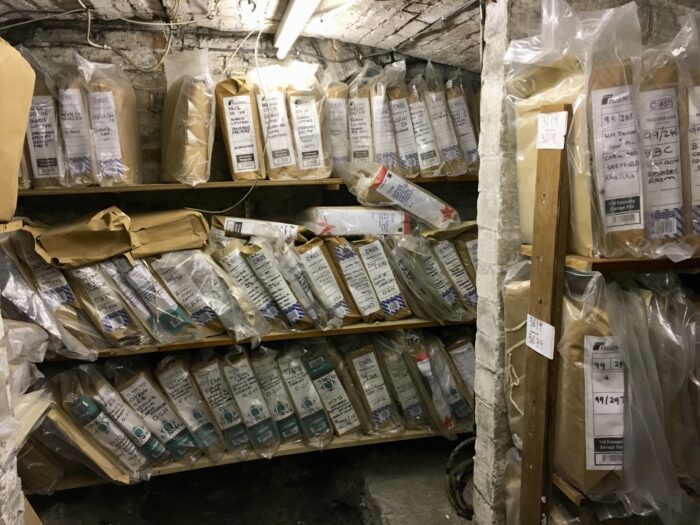 I will tell more of the story in my next newsletter in this series, but I thought I should set the scene by sketching a picture of milling in Hull at the start of the 20th century. Then two dominant figures, who were close friends and fellow Methodists, transformed the civic and industrial profile of the city. Sir Alfred Gelder, who had founded his firm in 1878, was Lord Mayor of Hull from 1898-1904 and in the year he stepped down, Joseph Rank was elected as President of the National Institute of British and Irish Millers (nabim). Gelder did a great deal of work for Rank and much of what we salvaged relates to Rank flour mills, with the earliest, dating from 1890, concerning his Clarence Mills in Hull.

There were two mills situated side by side to the left of the sprinkler tower in the illustration and a third not visible.  The two were to the right of the office building on the corner and occupied the whole of the 4 floors, with warehouses to the right of the sprinkler tower. The mills had 50 Simon double roller mills in six lines on the first floor. On the second floor were two lines of ten Simon dustless purifiers. By 1904 changes on the third floor added further Simon break mills and dustless purifiers. On the top floor 108 Simon centrifugals were arranged in tiers, three high. The uniform arrangements on each floor looked very smart. The third mill at the rear hosted a further 33 double roller mills, 10 dustless purifiers and 40 centrifugals.

The large structure to the left of the illustration was the grain silo. The imposing central building on the corner provided office accommodation on the first two floors; the floors above were for sacked good and general stores. As can be seen from the rescued Gelder and Kitchen drawings, the facade was dated 1896.

Elevation of Offices to Clarence Street

Steam power for the mills came from four Lancashire boilers; there were five altogether, with one always laid off for cleaning. Water was taken from the river and converted to steam at a pressure of 180 psi. The main drives were all by cotton ropes, 16 from the fly wheel of each engine. By 1904 production at the Clarence Mills had been expanded from 65 to 100 sacks per hour.

This brief account only skims the surface of what we hold. If you cannot wait to read about the rescue of this collection, and what a near-run thing it was, there is a short account in the Spring-2017 issue of Mill Memories or you can email us for free copy of the print version (we still have a few left!)