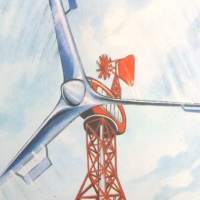 ‘Everything changes, everything progresses…’

This Gem is a trade card, a business card for companies which would have been distributed to clients and potential customers to advertise their products, services and contact details.

This card was produced for the French wine company, Byrrh, probably during the 1930s. It was part of a series of trade cards called ‘Looking Ahead’, each of which showcased a different new or developing technology with a brief explanation of it on the reverse. The range of cards included farming, interplanetary planes and thermal energy.

This card displays a wind turbine, which was first invented in 1888 but was just starting to really develop and gain popularity by the 1930s, with the invention of the Darrieus wind turbine in 1931 which upgraded the conventional horizontal-axis wind turbine to a vertical axis, accepting wind from any direction with no need for adjustments, and allowing the heavy generator and gearbox equipment to rest on the ground instead of on top of a tower.

The gradual change from traditional windmills to modern wind turbines in generating power would have been at the forefront of the public psyche at this time, which is reflected in the concluding phrase on the reverse of the trade card:

“Everything changes, everything progresses…
Only Byrrh cannot improve because it is the perfection of cinchona tonic wines.”

Despite the same phrase being displayed on every trade card, and obviously being a way to humorously advertise the ‘perfection’ of Byrrh’s wine, this rather fatalistic yet also optimistic philosophy of everything changing and progressing is very reminiscent of the approach many people took to the industrialisation of milling, and the progression from traditional milling with wind and watermills to modern milling with roller mills and electronic machines.

The contrast between the poetic past in which windmills are often depicted, and this modern wind turbine is shown in the futuristic style of the painting, which may well have been influenced by the building popularity of sci-fi novels during the early 20th century, spurred on by new inventions in science and technology which were stoking people’s imaginations. Interestingly the turbine is given a similar design to the Eiffel Tower which had its own vertical wind turbines installed in 2015.

Byrrh was started in 1866 by the brothers Pallade and Simon Violet. The drink, a wine-based aperitif flavoured with cinchona, was originally marketed as a health tonic due to its inclusion of quinine, as well as to stop it competing with other established French Wines. Prohibition and changing French tax incentives almost killed off the brand, but in more recent times it has regained some of its former popularity, with exports to America restarting in 2012.

Categories: Advertising and Symbolism, Gems of the Archive, Innovative Milling Technology, The Industrialisation of Milling