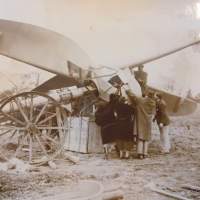 ‘It consists of a windmill, but one totally different in appearance and principle from all windmills known hitherto.’

This is a Ventimotor, designed by an Artillery Officer to save the German Milling Industry. It is a very early version of an electricity-producing wind turbine. Designed by Major Kurt Bilau, it makes use of principals from aeroplane design to produce greater centrifugal force, improving its efficiency and output. By placing the dynamo in the egg-shaped front of the turbine, he also minimised interference in airflow. When the sails of his Ventimotor were turned by the wind, in turn, they drove this dynamo which produced electricity.

Major Kurt Bilau was himself an interesting individual. Serving as an artillery officer for the German Army during World War I, he was awarded the Iron Cross. It is likely from his time in the army that his interest in windmills was peaked, as they were often used as observation posts and landmarks for targeting. Following the war he worked in Göttingen Aerodynamic Institute where a newspaper report in the Mirror 1924 states that “while working one day in his laboratory at Göttingen he saw in a flash that windmill construction had for thousands of years been all wrong”.

Bilau was concerned both with German post-war coal shortages and with the decline of traditional milling. His membership of the Prussian Officer Class had given him a paternal outlook, and he hoped that improvements in windmill design would improve output, thus guaranteeing livelihoods and traditional skills into the future. As such his sails were originally designed as modifications to windmills, whilst the Ventimotor itself was to provide an additional source of income to millers. His passion and tenacity for this pet project earnt him the nickname of ‘The Wing Major’.

An eccentric individual, alongside his sail designs Major Bilau also wrote and lectured on topics such as astrology and Atlantis.

Trading Wind: New wind turbines such as this were treated with excitement and expectation. For many they were seen to herald the future of electricity production. See how this excitement was captured in advertising here.

Categories: Gems of the Archive, Innovative Milling Technology, Made to Measure, Mills at War