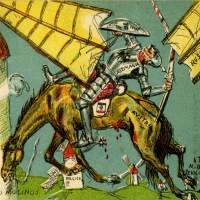 “Those over there are not giants but windmills.”

You’ve probably heard the common phrase ’tilting at windmills’, which, as the well-read amongst you might know, originates in the misadventures of Don Quixote – the influential novel written by the Spanish writer Cervantes in the early 17th century. As an idiom it refers to wasting time, fighting imaginary enemies, or pursuing an imagined but impossible goal – as did the hero of the story, the Don himself.

During the First World War, this phrase was often visually represented by artists in order to make symbolic remarks about the futility of war. This postcard from 1915 is titled ‘The New Don Quixote: The Adventure of the Mills’. It depicts a countryside scene showing six windmills, each one labelled as a country that made up the Triple Entente and its allies – with the largest windmill in the scene symbolising France. The windmill is being charged at by a knight on horseback: the knight, with his Prussian moustache and helmet, on a saddle marked with the German Imperial flag representes Germany, whilst the horse he rides symbolising Austria. The postcard mocks Germany and Austria, showing them as wasting their efforts by pursuing an imagined impossible goal, that of defeating the French and their allies.

What is particularly fascinating is the universality of the symbol of tilting at windmills: it was also used by the Triple Entente’s rivals, the Triple Alliance (the secret agreement between Germany, Austria-Hungary and Italy). The bottom picture shows a cartoon from the German satirical magazine Kladderadatsch, which was also published in 1915. In this version, the mill represents the monarchies of the Triple Alliance defeating England, France and Russia, which are symbolised by Asquith the British Prime Minister riding a lion, Marianne of the French Republic riding a rooster and Grand Duke Nikolai Nikolayevich Romanov riding a bear.

The fact that both sides sought to represent the other as delusional, wasting time and fighting an impossible battle, tells us a lot. It shows both sides’ determination to win and their belief that they were the stronger side – but more than that, it indicates the necessity of keeping the nation’s morale high by broadcasting these opinions through art. These postcards are fine examples of war propaganda decrying the opposition’s futile fight, whereas in retrospect we can now appreciate the futility of war in general.

Categories: Advertising and Symbolism, Gems of the Archive, Mills at War