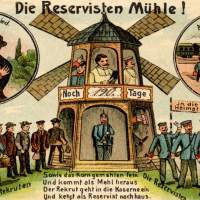 Mills are often used as a symbol of rebirth.

This intriguing Gem is a pre-First World War postcard entitled ‘The Reservist Mill’. It depicts German recruits going into the mill and coming out as reservists – the image explained by a poem underneath the mill:

‘Just as the finely-milled corn
Comes out as flour
The Recruit goes into the barracks
And goes home as a reservist.’

The postcard was produced at a high point of German, particularly Prussian, militaristic nationalism, following their victory in the Franco-Prussion War of 1870-1871. This victory had lead to the creation of Germany as a more unified state, combining provinces such as Saxony and Prussia. By 1914 Germany had the most efficient army in Europe, and implemented universal mass conscription. Men were recruited into compulsory military service which lasted for three years, followed by four years as a reservist.

‘Mailing cards’ such as this were introduced in Germany in 1865 by Heinrich von Stephan, the Postmaster General of the German Empire. The first legally printed postcard carried a similar Prussian militaristic theme, with a picture of a German Artillery man loading a cannon. From these origins, Germany would become the leader of the postcard printing industry, with a particular boom of ‘postcard mania’ in 1903.

Uniquely interactive postcards such as this one were used by military service recruits to send home to their families: there is a little space over the mill’s doorway which allowed the sender to fill in the number of days they had left to go – in this case, 190. Unfortunately, the writing on the reverse is illegible, but we can only imagine that it could have been an update on military training life by an enthusiastic young recruit, or a promise that a homesick reservist would soon be coming home to his loved ones.

This postcard demonstrates the extent mills are part of the communal psyche as they have become a popular motif beyond the milling world.

Categories: Advertising and Symbolism, Gems of the Archive, Mills at War, Mills with Unusual Functions