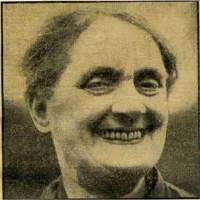 “With flour-dust sprinkled in her greying hair and a beaming smile [she] runs, all alone, the centuries-old watermill of Thunder Bridge.”

This jolly Gem is a newspaper cutting from the Daily Mail, from the 21st October 1938. It reports on the life and work of a certain Mrs H. Dickinson, who, having taken over the running of her mill after the death of her husband in 1936, was one of the only female millers in the country at that time.

The article, quite unlike the scathing paparazzi headlines that one often sees today, is written in beautiful, poetic language: “with flour-dust sprinkled in her greying hair and a beaming smile [she] runs, all alone, the centuries-old watermill of Thunderbridge.”

An evocative name in itself, Thunderbridge is situated in the town of Kirkburton in Huddersfield, West Yorkshire. The name ‘Thunderbridge’ is probably a contraction of ‘the underbridge’. The mill had been in Mrs Dickinson’s husband’s family for generations, and Mrs Dickinson explains that whilst he was alive, she took an increasingly important role due to her fascination with the mill.

‘I used to help my husband because the mill had a kind of fascination for me. Gradually, I learned all the processes – how to set the stone, how to control the flow of corn to the sacks underneath. Then when he died, I took over the mill. He wished it so’

It is clear from the article that Mrs Dickinson was hugely passionate about the mill and loved her work there. She would regularly produce one ton of ground flour a day, whilst all the time displaying her signature beaming smile. Indeed, she felt that millers were inherently jolly due to the work they did.

‘That is why I think millers are jolly. They have found happiness in their work.’

The only thing that puzzled Mrs Dickinson was why millers were always depicted as rotund men! Her reasoning:

‘if they had to run up and down steps as she does they would never have any time to grow fat.’

As well as this newspaper article, Mrs Dickinson was featured in a British Pathé clip which can be viewed here. The short film shows her bustling about her work around the mill, completing hard physical tasks such as grinding corn and moving sacks of flour. It is a testament to her strength of character as well as her muscle strength that Mrs Dickinson took on a job that women would not have usually been expected to do in the 1930s. Alongside her collie dog, Don, Mrs Dickinson the jolly miller gained significant recognition for her work as one of the only female millers in the country.

Gem from Daily Mail 21st October 1938
You can read more about Women in Milling here.