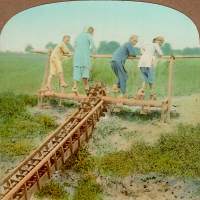 Stereographic images allowed the Victorians to explore the world from the comfort of their own home.

This amusing Gem, a stereoscope, was a popular Victorian device used to view optical illusions. The stereoscope was a pair of lenses through which picture cards, or stereographs, would be viewed. The cards had two almost identical images next to each other, which when observed through the lenses would appear to fuse together right before the user’s eyes. The device uses trickery of the brain to create an optical illusion: the viewer would see the image come to life in 3D, almost jumping out at them! This had a great appeal, captivating the minds of thousands throughout the Victorian era – it was said that every Victorian home of all classes owned one. They must have seen almost like magic to Victorians who were unused to moving pictures.

The images that one viewed through sterescopes were called stereographs. During their vogue thousands of different images were produced, which depicted anything from landscapes, to people, to buildings, to engineering masterpieces like skyscrapers – plus comical sketches, educational information, or even news of great disasters – for example, the 1871 Great Fire of Chicago was recorded on a stereograph. Remarkably, stereography was even used in the First World War to map trenches!

By far the most popular stereograph collections, however, were those of exotic locations. Companies commisioned photographers to travel the world taking pictures of wonders from around the globe, including the pyramids of Egypt, the temples of Japan, the Pantheon in Rome, and the Niagra Falls. These stereographs even succeeded in creating a new wave of tourism to these far and distant lands, with the rich wanting to see their Stereoscope views in real life!

Apt to the title, this is really a double Gem as you can’t have the stereoscope without a stereograph, and vice-versa. We also have a small collection of stereographs at the Mills Archive (obviously mostly on a milling theme!). The one you see in the photo combines both a milling and a foreign theme, depicting a family of Chinese peasants using a treadwheel to irrigate a rice paddy. It has been hand-coloured using a technique called hand-tinting to increase the novelty of the image. Other stereographs produced bearing a milling theme include Cuban sugar mills and Egyptian saqiyas – all of which satiated the Victorian and American thirst for novelty.

The popularity of these images took off after Queen Victoria gave them her approval at the Great Exhibition, and they enjoyed their heyday until the 1920s when they faded with the development of film and were disregarded as children’s toys. Despite this, stereographs had a brief renaissance as a children’s toy in the late 20th century.

The Mills Archive has a few different stereographs as well as a working stereoscope, which are available for viewing by visitors.