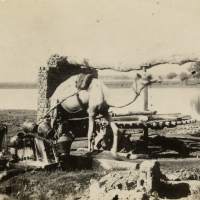 Mills come in all shapes and sizes: sometimes they even come with a camel.

This postcard shows a camel-driven Saqiya or Sakia. They were once a common sight across the Middle East and Asia, and in some areas are still in use today. They were animal-driven machines, with which water could be raised from one level to another for the purpose of irrigation. The name ‘Saqiya’ comes from the Arabic as-saqiya ( سَاقِيَة ), meaning ‘that gives water’.

The way a Saqiya worked was that an animal would be harnessed to a shaft attached to a large horizontal wheel. By walking around in a circle the animal then turned the wheel. This horizontal wheel would be connected to a vertical wheel by a series of interlocking gears. This vertical wheel, in turn, would drive a second vertical wheel. This second wheel would either have earthenware pots directly attached to it, or they would be tied to a large looped rope which would be placed over the wheel. These earthenware jars were called Zears or Qadus. When the wheel turned, the jars scooped up water, which were drawn up and would tip the water out into a trough. This would then transport the water to the fields for irrigation. British Pathe have an excellent clip of a Saqiya in action from the 1930s.

There is some debate about the origins of these wheels: in some places they are alternatively known as Persian wheels, and then others suggest they actually originated in India. However we do know that they developed during the Hellenistic Era (333-30BC) and were particularly common in Egypt. Egypt also used another system called a Noria, which was similar to a Sakiya but rather than being powered by animals they used the current of water down a river to turn the large wheels.

This Saqyia is a perfect example of how milling technology has developed in hugely different ways, with as many differences as there are mills.