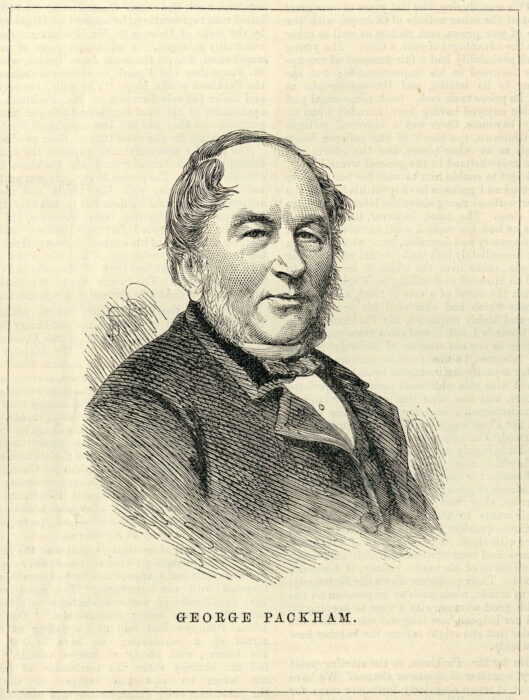 and he was engaged in the utilisation of the local water power for industrial purposes with very little prospect of success. Having time on his hands, and being naturally interested in everything connected with mill work, our English millwright was standing one day watching the proceedings of the French workmen.

They scarcely brought in the sum of two thousand five hundred francs, were in the worst possible state of construction, and would perhaps have been allowed to crumble into ruins, when an English mechanic, a plain workman, a practical and very experienced man, having realised the advantages of the site, and also the state of things, took a lease of that one of the two mills that the former lessee had given up, and fitted it up on a new system of mechanics. The prompt success, of which his talents and probity formed the basis, soon enabled the undertaker to lease the second mill, and put him within reach of creating, in an excellent position, before the eyes of the Prince, one of the finest and most remarkable works in the département. Nowadays the Packham mills, for one must call them by the name of their author, are renowned throughout Lower Normandy, where they have already served as patterns for several other mills.

Mills, one of which supplies to the building industry an immense quantity of planks sawn with marvelous rapidity, with the help of a new apparatus, whilst the other delivers annually for the food supply nearly a million Francs worth of flour, and to the marine the most excellent biscuits.

right from the beginning, wished to take part in the success of he who was able, in an undertaking of this sort, by his conduct and industry, to merit his confidence. Thus it is that Packham was entrusted with the execution of the magnificent marquetry-work parquet floors of all the rooms of the château, and with yet other works. Thus it is that, always master of his manufactury, free to manage its progress as he willed, this skilful mechanic has, on every occasion, obtained the assistance and the funds necessary for the amelioration and improvement of the different parts of his enterprise.

on the day that the famous Reform Banquet was to have taken place. Mr. Packham called at the Tuileries, scarcely expecting to see the king, who, however, saw him in his breakfast-room, and expressed his belief to his visitor that they would be able to cope with the Revolution.

The Duc de Nemours and several generals coming in, Mr. Packham left, His majesty saying, “I hope I shall see you, Packham, at Ville d’Eu by the end of the week, when we shall have a better opportunity of talking about these things.” On leaving the palace Mr. Packham saw the mob tearing up the pavement and erecting barricades in the Champs Elysees. The Revolution had broken out, and it was with some difficulty Mr Packham, three days afterwards, succeeded in getting out of Paris and crossing over to England where, on the second day after his arrival in Brighton, he received a mounted messenger from Louis-Philippe requesting him to come immediately to His Majesty at Newhaven. (Miller, 3 Sept 1877)