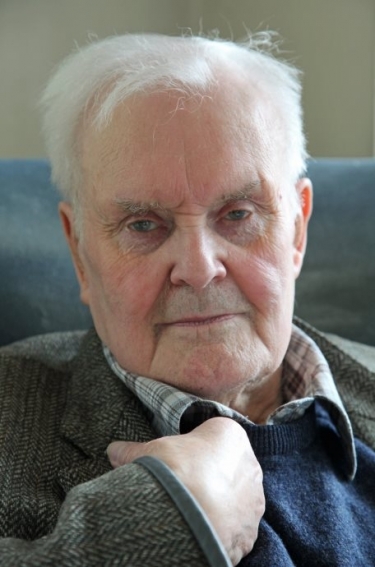 James Herbert Venn was born on 30th December 1921 at Furze Platt in Maidenhead.  He developed an interest in mills from a very early age, as evidenced by his building a model windmill in his parents’ garden whilst still a schoolboy. Photography was a second major strand of his personal interests, also rooted in his childhood years.

The coming of World War Two in September 1939 shaped James’s working life. During the early war years, he worked repairing Spitfires, and served in the army towards the end of the war. In 1946 he joined the newly formed British European Airways (BEA); he was seconded by BEA to the Foreign Office for service with the Berlin airlift from 1948 to 1949. In his late 20s he read for a BSc (Economics) degree at the London School of Economics, launching his career as a lecturer on Transport, Transport Economics, Construction Economics and Management at a number of Further and Higher Education institutions.

In the late 1930s, while still in his teens, James wanted to expand his knowledge of mills and actively sought out existing mill experts; as a consequence he was introduced to Stanley Freese. Stanley was a commercial artist by training and a very keen and able amateur photographer who, between 1933 and 1950, took hundreds of photographs throughout the country of landscapes, agricultural work, trees, buildings, windmills, watermills, and railways. James and Stanley remained good friends thereafter and worked together on early repairs to mills at Brill and Pitstone. Stanley had lived at “The Kraal”, Great Missenden, from the time his parents relocated there from London in 1908 when he was just six years old. Stanley retired in 1964, sold The Kraal to James and moved to Suffolk where he died in 1972. In his will he left James books, maps, manuscripts, notes, sketch books, photographic negatives and prints.

Using Stanley’s original material, James collaborated with Michael Farley and Edward Legg to edit Stanley’s watermill manuscript and, as a consequence The Watermills of Buckinghamshire – A 1930s account by Stanley Freese with original photographs was published by the Buckinghamshire Archaeological Society in 2007, ISBN 978-094900924-9.

Stanley also left to James in his will all his working papers and photographs of his historical survey of Buckinghamshire windmills. Although James made considerable progress in developing the manuscript he was unable to devote sufficient time and energy to bring it to publication. All of their combined mills documentation plus a significant archive of mills photographs taken by James Venn, Stanley Freese and Syd Simmons were been deposited at the Mills Archive, in accordance with James’s wishes. Guy Blythman then collaborated with staff and volunteers at the Mills Archive to edit Stanley’s manuscript. This was published in 2020 as Buckinghamshire Windmills , number 11 in the Mills Archive Research Publication series.

Stanley Freese’s bequest to James contained a large collection of photographs of Buckinghamshire scenes. James conceived the idea of extending this collection and undertaking a systematic survey of the whole county, parish by parish, making a pictorial record not only of the general characteristics of each place, but especially those features not likely to be the subject for other photographers. This covered factories, shops, public houses, schools, chapels, farms and filling stations, especially anything likely to disappear in the near future and the much neglected areas of 19th and early 20th century housing. Between about 1985 and 2002 James took between 1,000 and 1,500 photographs each year, all of which he meticulously annotated and catalogued. He supplied almost 3,000 images to be digitised by SWOP (Sharing Wycombe’s Old Photographs), launched publicly in July 2007 and accessible here.

The complete James Herbert Venn photographic archive of the Parishes of Buckinghamshire, together with the Freese archive, comprises over 20,000 photographic negatives and prints and is now conserved at The Centre for Buckinghamshire Studies at County Hall, Aylesbury. James’s photographic collection of Maidenhead and District (the area where he grew up and lived until moving into Buckinghamshire in 1964) has been deposited with the Maidenhead Heritage Centre. James lived at “The Kraal”, Great Missenden, for 50 years and died on 31st December 2014 at the age of 93.

Source: This is an edited extract of James’ biography written by his son in law, Nigel Nott in Buckinghamshire Windmills