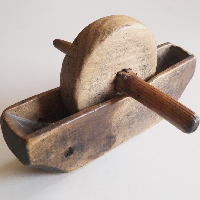 Feeding an army in the depths of a Russian winter requires some handy ideas.

Handmills like this one were carried by thousands of Swedish soldiers during the Great Northern Wars of the 18th Century. They were used by the Caroleans, the highly professional soldiers of the Swedish Empire.

Grain both lasts longer than flour, and is far easier to store and transport. As a result, many armies throughout history have granted its soldiers rations in grain rather than finished food, a practice that dates back to the armies of Imperial Rome. Napoleon’s Grande Armée brought hand-cranked mills with them on the Russian Campaign, but these were heavy and cumbersome. In comparison, this simple Swedish mill could be carried by each individual soldier. Made out of wood, it was light and could be easily dismantled into three parts, and was easy to repair. As the mill was made out of wood, the grains would have to be very soft: when we tried to grind modern grains in it, they were too hard.

It is a very simple mill to work: the grain would go into the trough, then the soldier, using his own strength, ran the large wheel over the grains. From here the flour could be turned into bread, biscuits and flat cakes depending on the needs and desires of the soldier as well as marching conditions and the other ingredients available. Indeed this was another advantage with soldiers grinding their own flour as it is more adaptable to the variable conditions of warfare.