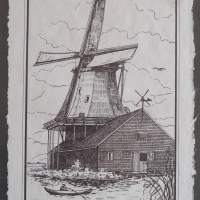 Turning your shirts into books.

This Gem is a picture that tells a story of its own origin: a sketch of a windmill, drawn on paper which has been handmade in the traditional way.

Although the sketch is titled ‘Molenpapier’, or ‘papermill’, it seems that the mill in the picture is not actually a papermill at all but the Dutch paint mill Verfmolen de Kat. Built in 1781 in Zaandam, North Holland, it is now the last working paint mill, which produces pigments for paint on a pair of large millstones and opens regularly to visitors.

Mills, powered by either wind, water, humans or animals, were commonly used to make paper until paper-making machines were invented during the Industrial Revolution.

The process of papermaking was done by a very poor group of people from developing towns and cities. Men, women and children could all work as rag pickers who collected old bits of material and brought them to the mill where women known as ‘rag girls’ would sort the rags into different types, open the seams, remove the buttons and cut the pieces to size. These rags could be made from various different types of material, from old clothes to sailcloth. There were two types of quality: lower quality fibres such as hemp making brown paper, and high-quality white paper being made from cotton and linen.

Once the women had prepared the rags, they would then feed them into the mill-driven machines which broke down the rags and separated the fibres, mixing them with water to create a soggy mixture called pulp. Using a wire mesh the same size as the desired piece of paper as a mould, portions of pulp were taken out and spread over the mesh, pressing it down hard so that the water is squeezed out through the mesh, the fibres knit together and a sheet of paper is formed. The sheets were then hung up to dry, and voila – there you have your paper.

Paper was originally invented in China around 200 BC. It came to Europe through the Islamic World, travelling up through Spain during the period of the Reconquista. From here it spread around Europe with the first recorded paper mill in the UK dating to 1488. The invention of the Fourdrinier Machine in 1803 industrialised the process, bringing to an end the centuries-old history of commercial traditional paper milling.

Categories: Gems of the Archive, Mills with Unusual Functions, Women at Work