Fortification was introduced in the UK during the Second World War over a concern about Rickets, a soft bone condition caused by a lack of Calcium. Not only was this being found in women joining the Women’s Land Army, there was concern that with rationing dairy consumption would be reduced. Fortification has maintained a presence in bread ever since. Its based on the theory that by adding nutrients to staple foods you can increase their presence in the diet of a large proportion of the population. 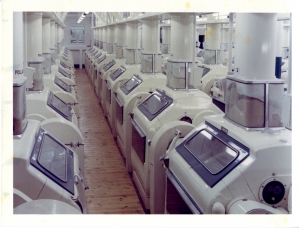 What began with Calcium has been expanded. The Bread and Flour regulation Act 1998 requires that bread contains no less than:

All of these nutrients are already contained in wholemeal, however, in white and brown they are lost and so have to be added back in.

Debate continues over the state of fortification in bread. As it stands though a 2013 government review decided to keep it as it is. One idea that is gaining momentum is that folic acid should also be added. This would reduce the chance of Neural Tube Defects in developing babies. This is where the Neural Tube (what becomes the brain and spine) doesn’t close up properly. It is also important in the formation of red and white blood cells. Between 2016 and 2017 the Bread and Flour Regulations (Folic Acid) Bill was introduced to implement this. However the process of the bill was stopped as Parliament was dissolved for the 2017 general election.